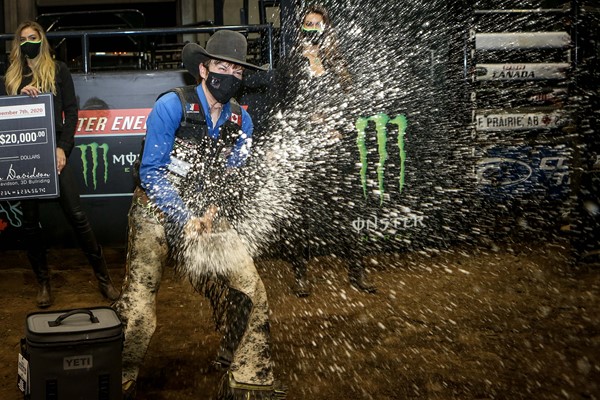 EDMONTON, Alta. – For the first time in league history, PBR (Professional Bull Riders) will hold the Canadian National Finals in Edmonton, Alberta, with the season-culminating event, part of the elite Cup Series, debuting inside the state-of-the-art Rogers Place Nov. 12-13 when the 2021 PBR Canada Champion will be crowned.

Adding to the prestige of the event, for the first time in league history, the 2021 PBR Canada National Finals, presented by Command Tubular Products, will be broadcast LIVE on TSN.

Entering the series of season-culminating events with a firm grip on the No. 1 rank in the national standings, Buttar furthered his stronghold in the opening tour stop, finishing third to expand his lead over then No. 2 Garret Green (Meeting Creek, Alberta) to 137 points.

Buttar then notched his third Cup Series event victory of 2020 on the second night of action for the Canadian National Finals to clinch the season’s PBR Canada Championship.

As the 2020 PBR Canada National Finals wound to a close, Buttar completed his impressive tear through the year-ending events with a win in the final tour stop, earned courtesy of an 88-point ride on Bull of the Year contender Finning Lil Shorty (Flying Four Bucking Bulls).

The Saskatchewan-native concluded the 2020 season 240.17 points ahead of runner-up, and two-time PBR Canada Champion, Zane Lambert (Ponoka, Alberta), having gone a torrid 18-for-25 (72%), including a historic 11-out ride streak to begin the year. He also registered a head-turning six event wins across the 13 events he competed at on home soil throughout the year.

The elite Cup Series features Canada’s top bull riders, alongside some of the PBR’s top international athletes, squaring off against the rankest bucking bulls in North America. Fans will witness exhilarating 8-second rides and wrecks throughout the action-packed event as the PBR’s courageous riders face off against their 2,000-pound, animal-athlete opponents.

At the 2021 iteration of the PBR Canada National Finals, three riders will be seeking history – Buttar, Lambert and Roy.

Rounding out the contingent, Buttar is attempting to accomplish a feat never done before – repeating as the PBR Canada Champion in back-to-back seasons.

While the PBR Canada National Finals have never before been held in Edmonton, Rogers Place has once prior hosted the PBR, welcoming the league for the first-ever PBR Global Cup, akin to the Olympics of bull riding, in November 2017.

Tickets for the event go on sale Friday, July 16 at 10:00 a.m. MDT, and start at $30, standard fees may apply. They can be purchased online at Ticketmaster.ca.

In cooperation with local government and through the dual activation of the PBR’s “Be Cowboy Safe” guidelines, and Alberta Health COVID-19 rules and regulations, Rogers Place and PBR will follow all COVID-10 (coronavirus) related protocols for holding fan-attended events.