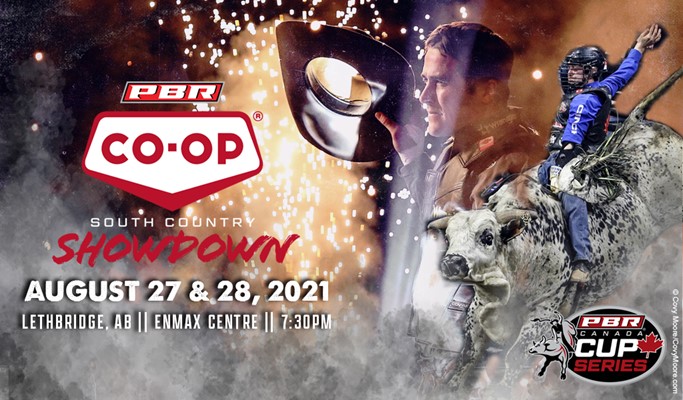 LETHBRIDGE, Alta. – For the first time in league history, PBR (Professional Bull Riders) Canada will launch the season for the elite Cup Series in Lethbridge, Alberta. The tour returns to the Alberta city for the third consecutive year Aug. 27-28, 2021, welcoming fans to ENMAX Centre for the fan-attended PBR South Country Co-op Showdown, presented by VisitLethbridge.com.

After playing host to the last fan-attended Cup Series event prior to the onset of the COVID-19 (coronavirus) pandemic in early March, Lethbridge was the site of the league’s historic return to competition with a double-header in late July 2020 following a 138-day hiatus from live events.

In front of a sold-out crowd, Dakota Buttar (Kindersley, Saskatchewan) won the March 2020 event in Lethbridge, marking one of his six event victories en route to the 2020 PBR Canada Championship.

Later that season, Brock Radford (De Winton, Alberta) and Ty Ellis (Sonningdale, Saskatchewan) tied for the victory at the opening iteration of the Lethbridge double-header in July, while Garrett Green (Meeting Creek, Alberta) won the third event of the season in Lethbridge held later the evening, which also marked the first fan-attended sporting event in Canada since the onset of COVID-19.

As the lone rider to go a perfect 3-for-3, Jared Parsonage (Maple Creek, Saskatchewan) captured the second premier series event win of his career inside ENMAX Centre.

PBR Canada’s return to Lethbridge comes on the spurs of the league’s resilient 2020 campaign which concluded with Buttar winning his career-first PBR Canada Championship.

Delivering a near perfect 5-for-6 effort at the three-day, four-event 2020 PBR Canada Finals Week, logging two additional event victories, Buttar never relinquished the No. 1 ranking, finishing the year 240.17 points ahead of No. 2 Zane Lambert (Ponoka, Alberta).

With one Touring Pro Division event already complete in 2021, the Tanner Byrne Invitational, the battle for the year’s national championship is shaping up to be yet another race for the ages.

Rounding out the contingent, Buttar is attempting to accomplish a feat never prior done. Should he repeat as the PBR Canada Champion, he would become the first rider to win the championship in back-to-back seasons.

In cooperation with local government and through the dual activation of the PBR’s “Be Cowboy Safe” guidelines, and Alberta Health COVID-19 rules and regulations, ENMAX Centre and PBR will follow all COVID-10 (coronavirus) related protocols for holding fan-attended events.