Fall Tailgate Festival to Kick Off Action-Packed Weekend of Festivities for the 2021 PBR Canada National Finals in Edmonton on Nov. 12-13 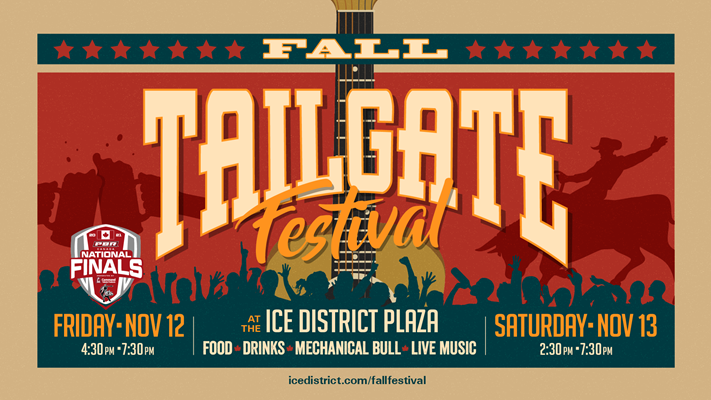 EDMONTON, Alta. – Ahead of the 2021 PBR (Professional Bull Riders) Canada National Finals, presented by Command Tubular Products, on Nov. 12-13 in Edmonton, Alberta, the PBR and Rogers Place have announced the Fall Tailgate Festival, an action-packed, fun-for-all ages fan zone that will kick off the historic year-end event that will award more than $175,000 in prize money and crown the 2021 PBR Canada Champion.

Set to take over the ICE Plaza at the ICE District in front of Rogers Place, the free-to-attend Fall Tailgate Festival will begin at 4:30 p.m. MST on Friday, November 12 and 2:30 p.m. MST on Saturday November 13.

Both days of the Fall Tailgate Festival will include food and beverages available for purchase, including a signature cocktail from Pendleton Whisky, the official whisky of the PBR, mechanical bull rides, sponsor activations from other league partners, and merchandise stands for both the league and performing musical artists.

Renowned Canadian recording artists Sparrow Blue, FKB, The Brigadiers, Hailey Benedict and The Prairie States will also be performing throughout the weekend.

FKB is a high-energy, four-piece, alternative rock band based in Edmonton, influenced by the mystique, glamour, and excess of the 1960s-1980s entertainment business. Formed in Bonnyville, Alberta, the band is fronted by JUNO Award-nominated songwriter Drew Shalka, and features Travis Topylki, Derek Chalut, and Alex Fedorouk. The band has performed more than 200 shows across North America since 2017, and tn 2019, they won the Edmonton edition of the Jim Beam National Talent Search, which culminated in a showcase performance at Canadian Music Week in Toronto.

The Brigadiers showcase a varied sound, and while they are always acoustic, have various influences including bluegrass, Americana, old time, and Western Canadian. The band members are Sean Brewer, Darrek Anderson and Braden Sustrik.

The Prairie States is a seven-time Country Music Alberta Award winning group, including the 2018 Rising Star, 2019 Horizon Group/Duo Of The Year, and 2020 Songwriters Of The Year, as well as won first place in the 2018 Project Wild Artist Development Program. Mat Cardinal, Jeff Dick, Mike Nash, Doc deGroot, and Jay Der formed The Prairie States in 2017, and in 2018 independently released their full-length album, Lost In The Right Direction, which was nominated for the CMAB Album Of The Year and included three radio singles, which all broke the top 100 Mediabase Canadian Country Chart.

Sparrow Blue and FKB will take to the stage on November 12, followed by The Brigadiers, Hailey Benedict and The Prairie States on November 13.

On Friday, November 12, the Fall Tailgate Festival will also feature a LIVE tapping of the NFP Podcast. Hosted by 2021 PBR Canada National Finals bullfighter Tanner Byrne, among others, the 30-minute, no-holds-barred conversation will feature various riders and stock contractors who will be competing inside Rogers Place for the historic year-end event.

Uniquely programmed on Saturday, November 13, PBR Canada’s Official Entertainer Brinson James will be on hand performing his signature rope tricks, followed by PBR Canada Safetyman Wade Grover who will be on the ICE Plaza with his trusted equine partner.

The 2021 PBR Canada National Finals, presented by Command Tubular Products will be held immediately following the Fall Tailgate Festival, at 7:30 p.m. MST on both Friday, November 12 and Saturday, November 13.