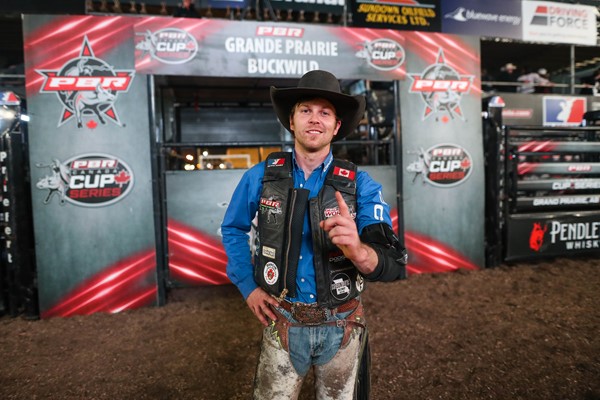 Dakota Buttar extended his lead atop the national standings after the opening night of competition in Grande Prairie, Alberta. Photo: Covy Moore/CovyMoore.com.

Buttar, who travelled to Bonnetts Energy Centre in Grande Prairie, Alberta amidst a four-out ride streak, was quick to continue his momentum for the second Cup Series event of the 2021 season.

Drawing Broken Trigger (Skori Bucking Bulls), the Saskatchewan contender reached the whistle for 83.5 points to tie for second in Round 1.

The score was Buttar’s third in as many attempts aboard the powerful bovine athlete.

In 2019, Buttar rode Broken Trigger for 85 points en route to his win in Medicine Hat, Alberta, while the two had their rivalry reignited this past weekend in Prince Albert, Saskatchewan, as Buttar was marked 83.5 points before concluding the Touring Pro Division event fifth.

The Round 1 score not only propelled Buttar to the runner-up position on the overall event leaderboard, but also earned him a spot in the 5/5 Bucking Battle, which pitted the Grande Prairie event’s Top 5 riders against five of the country’s rankest bulls.

In the special round, the 28-year-old faced a new opponent in Trump Card (X6 Ranch Bucking Cattle/Lazy S Bucking Bulls). Undeterred, Buttar erupted from the chutes, remaining in picture-perfect form as he reached the requisite 8 for a round-best 87.5 points.

Buttar concluded the electric night of competition having earned 25.5 national points, allowing him to further his stronghold on the No. 1 position in the race for the 2021 PBR Canada Championship and accompanying $50,000 bonus.

In addition to attempting to become the first ever back-to-back PBR Canada Champion in history, Buttar is also seeking to join the elite contingent of riders who have won the prestigious honor in multiple seasons. To date, only two riders have earned the PBR Canada Championship in multiple seasons – three-time Champion Aaron Roy (Yellow Grass, Saskatchewan) and two-time title holder Lambert.

Buttar will enter Championship Saturday, and his showdown with Built Tough (Thompson Rodeo Livestock), amidst a six-out ride streak. Last season en route to his first national title, Buttar tied the league record for most consecutive bulls rode on Canadian soil when he covered his first 11 draws of the 2020 campaign.

While all eyes were on Buttar, veteran contender Lambert finished seventh in Round 1 of the PBR Grande Prairie BuckWild to retain his No. 2 rank in the national standings.

Lambert will look to make a dent in Buttar’s lead in Round 2 Saturday evening when he climbs aboard Time Well Spent (Thompson Rodeo Livestock).

Peace River Country’s own Jake Gardner (Fort St. John, British Columbia) was the only other rider to deliver a flawless finish Friday evening, covering his bulls in both Round 1 and the 5/5 Bucking Battle.

Marking just his second event on Canadian soil in 2021, opting to begin his year stateside, Gardner brought the raucous Alberta crowd to its feet when he rode Oldsmobile (X6 Ranch Bucking Cattle/Leitch Cattle Co.) for 82 points in Round 1.

While the score positioned him outside the Top 5, leading him to conclude the opening round sixth, injury afforded Gardner a second chance in the 5/5 Bucking Battle.

Gardner earned 15 national points, catapulting him from No. 26 to No. 19 in the national standings. He is now within 186.83 points of No. 1 Buttar and will attempt Dance Monkey (Wild Hoggs/Lou Streeter) in the tour stop’s second round.

Seven-time PBR World Finals qualified Roy was unmatched in Round 1, topping the field courtesy of an 84.5-point effort aboard Stutter Step (Vold Rodeo).

Jared Parsonage (Maple Creek, Saskatchewan) tied for second in Round 1 alongside Buttar after recording a matching 83.5-point score.

Parsonage covered Blow Me Away (Vold Rodeo) for 83.5 points to net 10.5 points in the race for the 2021 PBR Canada Championship.

The qualified ride was the second of Parsonage’s career aboard the striking bovine, initially riding him for 87 points during the 2019 Calgary Stampede.

The Saskatchewan cowboy is now No. 8 in the national standings ahead of Championship Saturday, up one position after making the journey to Grande Prairie ranked No. 9. Parsonage trails top-ranked Buttar by 104.66 points and is set to face off against Tractorland.ca (Wild Hoggs/Trevor Williams) in Round 2.

Young gun Tanner Eno (Coronation, Alberta) was fourth in Round 1 of the PBR Grande Prairie BuckWild.

In the hunt for the 2021 PBR Canada Rookie of the Year honor, Eno rode Alberta Prime Union Black (Chase Kesler Bucking Bulls) for 83 points inside Bonnetts Energy Centre. The 8 seconds of work netted him 6 national points and allowed him to take sole ownership of the No. 10 rank in the national standings.

Rounding out the Top 5 in Round 1 was Garrett Green (Meeting Creek, Alberta) in fifth.

PBR Canada Cup Series action from Grand Prairie, Alberta, and Bonnetts Energy Centre will conclude on Saturday, October 2, starting at 7:00 p.m. MDT, with Round 2 and the championship round.