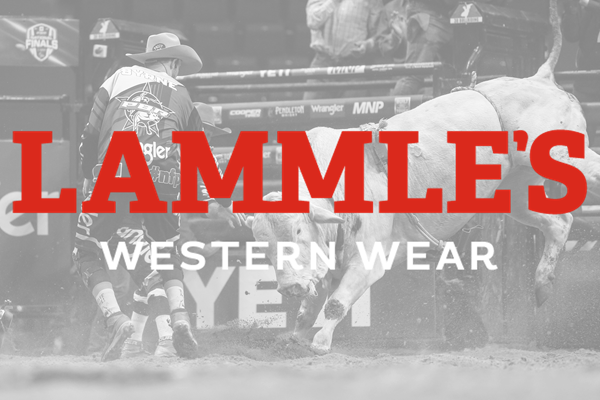 Lammle's will be the Official Western Wear Retail Partner of the PBR Canada Cup Series, presented by Wrangler, for the 2022-23 seasons. Photo: Covy Moore/CovyMoore.com.

As part of the new-forged partnership, Lammle’s will co-sponsor PBR Canada’s fearless bullfighters, alongside Wrangler. In addition to the bullfighters now being known as the Lammle’s “Live Your Own West” Bullfighters, presented by Wrangler, the brand will also be featured during each event’s Wrangler Pro Perspective bullfighter spotlight during the TSN telecasts.

“Our long-standing relationship with Wrangler goes back generations,” said Barry Lammle, President & CEO, Lammle’s Western Wear. “It was fitting to jump into this partnership with the PBR Canada Cup Series which brings an exciting western experience to our communities. We’re excited for this ride together and to outfit everyone to live their own west.”

“As the elite PBR Canada Cup Series, presented by Wrangler, continues to entrench itself as one of the nation’s most prominent Western sports properties, we are excited to welcome Lammle’s Western Wear to the family,” said Jason Davidson, General Manager of PBR Canada. “Lammle’s not only has a natural connection to Wrangler, but through their commitment to the Cowboy way and appreciation for the Western values amongst people of all walks of life, they are a natural addition to the Cup Series as we continue to strive to take bull riding to new heights in Canada.”

Along with their co-sponsorship of PBR Canada’s bullfighters, Lammle’s will have an in-event presence via signage, video inclusion, and giveaways, and be present across PBR Canada’s social media platforms.

Lammle's is Canada's largest Western wear retailer. The homegrown and family-owned company has proudly outfitted the nation since 1983. Initially launching with three stores across Calgary, Alberta, there are now 23 storefronts throughout Western Canada as Lammle’s continues to build a lifestyle brand experience that welcomes everyone, western or not.

The elite PBR Canada Cup Series, presented by Wrangler, televised on the TSN family of channels, features Canada’s top bull riders, alongside some of the PBR’s top international athletes, squaring off against the rankest bucking bulls in North America.

In 2022, which marks the seventh year of operation for the premier Cup Series, the tour is anticipated to hold nine events across Alberta, British Columbia, Manitoba, and Saskatchewan. The season will come to a climatic end in Edmonton, Alberta at Rogers Place for the PBR Canada National Finals where the 2022 PBR Canada Champion will be crowned and earn the accompanying $50,000 bonus.