Dakota Buttar Wins Touring Pro Division Event in Winfield, Alberta to Overtake No. 1 Rank in the Race to be Crowned the 2022 PBR Canada Champion 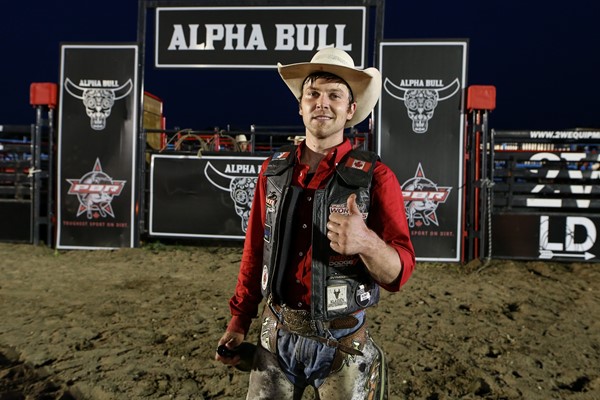 After earning a re-ride in Round 1, unable to get out of the chutes aboard Wild Time (Vold Rodeo), Buttar next readied to attempt Red Rust (Vold Rodeo). Matching the animal athlete jump-for-jump, Buttar reached the requisite 8 for 80 points.

Buttar advanced to Round 2 runner-up on the event leaderboard, next tasked with Devils Dues (X6 Ranch Bucking Cattle/Legend Rodeo Stock). The stoic Canadian delivered his second score in as many attempts as he covered the bull for an event-best 87.5 points to clinch the victory.

For his golden finish, Buttar earned a crucial 30 points, overtaking the No. 1 rank in the national standings. He now leads No. 2 Logan Biever (Claresholm, Alberta) by 13.5 points.

Biever was second in Winfield as the only other rider to go a flawless 2-for-2.

After riding Canadian Miracle (Wild Hoggs Bucking Bulls) for a Round 1-best 80.5 points, Biever punctuated his event with an 84-point score atop Bar Star (X6 Ranch Bucking Cattle/Legend Rodeo Stock) in Round 2.

Biever left Winfield have earned 20 national points. He climbed from No. 3 to No. 2 in the nation.

After bucking off in Round 1, Hartman rebounded in the second round, conquering Alberta Twister (X6 Ranch Bucking Cattle/Legend Rodeo Stock) for 86 points.

Hartman rose three positions in the race to be anointed the 2022 PBR Canada Champion, climbing from No. 24 to No. 21.

Green remained No. 20 in Canada.