Dakota Buttar Wins Manor Fun Daze PBR to Surge to No. 3 in the Race to be Crowned the 2022 PBR Canada Champion 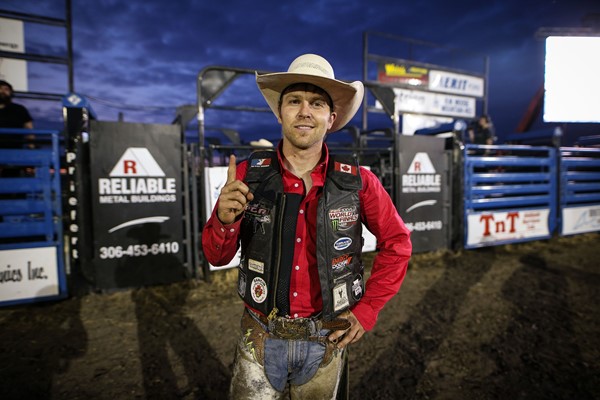 In Round 1, Buttar was one of four contenders to deliver a qualified ride. Covering Night Blood (Vold Rodeo/Robinson) for 82 points, Buttar set his sights on Round 2 second on the event leaderboard.

The reserved Saskatchewan contender then faced off against Bat Chute Crazy (Outlaw Buckers Rodeo Corp.). Once again reaching the requisite 8, Buttar clinched the victory with an 82.5-poitn score.

Buttar’s golden finish garnered him 28 national points. He rose from No. 5 to No. 3 in the national standings, climbing within 34.5 points of No. 1 Brock Radford (De Winton, Alberta).

Roy’s Top 5 finish was headlined by an 81-point ride aboard Overhaul (Flying Four Bucking Bulls) in Round 1.

The veteran rider remained No. 7 in the national standings, now 74 points removed from the top position.

After a buckoff in the opening round dealt to him by Freaked Out (Lazy S Bucking Bulls), Robbins was quick to rebound for the second round of competition.

As the only other rider to deliver a score, Nick Tetz (Calgary, Alberta) was third.

Garnering 15 national points, Tetz cracked the Top 5 in the heated race to be anointed the 2022 PBR Canada Champion, rising from No. 6 to No. 4. Tetz is now just 52 points back of No. 1 Radford.