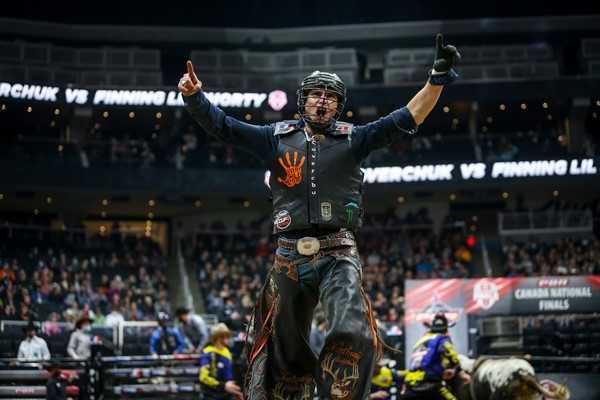 EDMONTON, Alta. – For the second time in history, PBR (Professional Bull Riders) will hold the Canadian National Finals, presented by Command Tubular Products, in Edmonton, Alberta, with the season-culminating event, part of the elite Cup Series, presented by Wrangler, returning to the state-of-the-art Rogers Place Nov. 11-12 when the 2022 PBR Canada Champion will be crowned.

Tickets for the event go on sale Friday, March 25 at 10:00 a.m. MST, and start at $30, standard fees may apply. They can be purchased online at Ticketmaster.ca.

Last season, when the PBR Canada National Finals debuted in Edmonton, Rogers Place played host to the event that punctuated one of the most exciting, and historic, battles for the PBR Canada Championship in history.

Swearingen capped his outing inside Rogers Place with a ride that won’t soon be forgotten. Remaining in perfect harmony with Happy Camper (Two Bit Bucking Bulls), Swearingen took the striking bull to the whistle for 91.5 points – the top-marked ride of the 2021 season on Canadian soil, clinching the event win for Swearingen and propelling Happy Camper to the 2021 Canadian Global PBR Canada Bull of the Year honor. The first bovine athlete in Canadian history to be anointed the PBR Canada Bull of the Year multiple times, Happy Camper, who first won the honor in 2018, earned the 2021 title, and accompanying $10,000 bonus, after concluding the year with a 45-point average.

The elite Cup Series features Canada’s top bull riders, alongside some of the PBR’s top international athletes, squaring off against the rankest bucking bulls in North America.

At the 2022 iteration of the PBR Canada National Finals, four riders will be seeking history – Coverchuk, Buttar, Lambert and Roy.

If Buttar were to again win the title, he would become the fourth multi-time PBR Canada Champion in history. Should Coverchuk or Lambert earn their third Canadian Championship, they would tie Roy for most national titles held by one rider in league history. If Roy were to earn his fourth national title, he would further solidify his standing as one of Canada’s greatest bull riders ever.