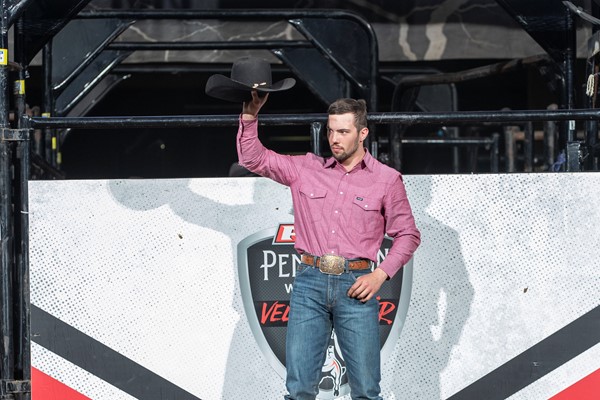 CORPUS CHRISTI, Tex. (May 4, 2022) – Ahead of the 2022 PBR (Professional Bull Riders) Pendleton Whisky Velocity Tour Finals, on May 6-7 in Corpus Christi, Texas, the organization today announced the 45-rider field that will compete at the expansion series’ season-culminating event. Canadian young gun Griffin Smeltzer earned his career-first berth to the event as the No. 1-ranked rider in the Velocity Tour standings and will compete side-by-side with fellow Canuck Blake Smith.

Along with the Canadian flare, the contingent will be headlined by world No. 1 Joao Ricardo Vieira and No. 2 Daylon Swearingen.

Seeking his first PBR World Finals berth, Smeltzer has three pathways to reach the upcoming two-weekend marathon event. In addition to being eligible for one of the four berths courtesy of his final rank in the tour standings or event performance, Smeltzer also has the opportunity to earn the invite awarded annually to one international competitor from the Velocity Tour Finals.

In 2017, Jose Vitor Leme earned this invite, which set forth a career which continues to reshape the PBR record books.

Marking his first season competing stateside, Smeltzer has been sensational. In late April, the Albertan reached a crucial career milestone, earning his first Velocity Tour event win when he topped the field in Wichita, Kansas. In addition to his golden finish, Smeltzer has logged an accompanying five Top 10 efforts on the Velocity Tour.

Smith will also make his debut this season at the Pendleton Whisky Velocity Tour Finals. The 20-year-old’s campaign has included seven Top 10 performances on the expansion series, including twice finishing a career-best third.

The Saskatchewan native is tied for No. 23 in the Velocity Tour standings, 30.5 points behind No. 1 Smeltzer.

Vieira and Swearingen have been locked in an intense battle atop the world standings from the moment the season began. They will begin the Velocity Tour Finals separated by a mere 32.34 points as each rider continues his quest to be crowned the 2022 PBR World Champion.

The championship event at American Bank Center Arena culminates a high-intensity season that began first week of January and crisscrossed the country with 25 events held across four months, including eight weekends with two events held simultaneously, marking the tour’s most successful season since its inception in 2015.

Additionally, via the PBR Pendleton Whisky Velocity Tour Finals, five riders will earn a berth to the PBR World Finals, scheduled for May 13-22 in Fort Worth, Texas, at Dickies Arena.

While Vieira is competing compliments of his world rank, Swearingen earned his berth to the Velocity Tour Finals courtesy of his Top 35 rank in the expansion series’ standings.

Vieira’s season has been headlined by a PBR-best three Unleash The Beast victories, along with five 90-point rides and five round wins. As a result of his successes, Vieira has led the world standings the past seven weeks. Overall this season, he has been No. 1 13 weeks.

Chasing history in 2022, should Vieira earn his first gold buckle at season’s end, he would become the oldest PBR World Champion in history. Currently 37, Vieira would surpass Adriano Moraes, who won his third title in 2006 at age 36.

Swearingen has remained hot on Vieira’s spurs throughout the entire regular season. Briefly leading the world for three weeks earlier in the 2022 season, Swearingen has earned two premier series wins, while logging a matching five round wins and six 90-point rides.

Other world Top 10 contenders anticipated to compete at the Velocity Tour Finals are: No. 6 Luciano de Castro and No. 10 Eli Vastbinder.

Ranked No. 35 in the world, Alves is on the bubble of qualifying for his 13th consecutive PBR World Finals. He leads No. 36 Alex Marcilio, who is also competing at the Velocity Tour Finals, by a mere 1.16 points.

Caminhas, who is ranked No. 85 in the world, 98.83 points outside of the Top 35, is attempting to become the oldest rider to qualify for the PBR World Finals. Currently 46, the record was set by Wallace Vieira de Oliveira in 2020 who qualified to the World Finals by way of the Velocity Tour Finals.

The bull riding action for the 2022 PBR Pendleton Whisky Velocity Tour Finals, presented by Coastal Bend Chevy Dealers, begins at 7:30 p.m. CST on Friday, May 6, and 6:00 p.m. CST on Saturday, May 7 at American Bank Center Arena.

Each of the 45 competing riders will attempt one bull each in Round 1 on Friday, May 6, followed by Round 2 on Saturday, May 7. At the conclusion of the second round, the riders’ individual two-round scores will be totaled with the Top 10 advancing to the championship round for one more out and a chance at being crowned at the 2022 PBR Pendleton Whisky Velocity Tour Champion and Finals event winner.

Tickets for the season-culminating, two-day event are on sale now, and start at $15, taxes and fees not included. Tickets can be purchased online at Ticketmaster.com and PBR.com, at the American Bank Center Arena Box Office or by calling PBR customer service at 1-800-732-1727.

PBR Elite Seats are available for $175 for avid fans who want an exclusive VIP experience while enjoying the world’s top bull riding circuit. These tickets offer the best seats in the venue, a question-and-answer presentation with some of the top bull riders and stock contractors in the world, $10 concession voucher, souvenir credential and lanyard, and post-event photo opportunity from the dirt.