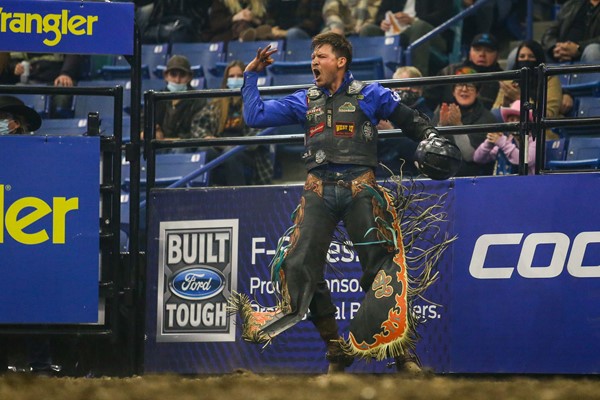 For the 14th time in history, PBR (Professional Bull Riders) Canada will buck into Saskatoon, Saskatchewan, as the elite Cup Series, presented by Wrangler, will take over SaskTel Centre for two days of competition on October 28-29 for the PBR Saskatoon Classic, presented by Redhead Equipment and CASE IH.

The PBR Saskatoon Classic, presented by Redhead Equipment and CASE IH, will mark the eighth event of the 2022 season for the PBR Canada Cup Series, presented by Wrangler, and final stop for the nation’s premier series prior to the National Finals, presented by Command Tubular Products, on Nov. 11-12 in Edmonton, Alberta. The tour will launch on June 11 in Red Deer, Alberta, and travel across Alberta, British Columbia, Manitoba, and Saskatchewan prior to arriving in Saskatoon.

Last season in Saskatoon, Jordan Hansen (Okotoks, Alberta) delivered a perfect 3-for-3 performance to win the PBR Saskatoon Classic and crack the Top 5 in the race for the 2021 PBR Canada Championship.

Hansen was one of 15 riders to deliver a score in Round 1, covering Black Jack (Skori Bucking Bulls) for 82 points. The reserved Albertan then climbed the leaderboard when he tied for third in Round 2 courtesy of an 84-point effort aboard New Tattoo (Wild Hoggs Bucking Bulls).

Hansen earned a critical 81 national points, propelling him inside the Top 5 in the race for the 2021 PBR Canada Championship. He surged to No. 3 in the standings, inching within 96.66 points of then No. 1 Dakota Buttar (Kindersley, Saskatchewan).

As the dramatic season continued to unfurl, Hansen remained a title contender until the final rounds of the year, a key contender in one of the most exciting, and historic, battles for the PBR Canada Championship in history.

After a dominant season, including four event wins across all levels of competition and a victory in one of the division’s special 5/5 Bucking Battles, Buttar entered the 2021 PBR Canada National Finals with a firm grip on the No. 1 ranking in the race for the 2021 PBR Canada Championship and accompanying $50,000 bonus.

However, a groin injury initially sustained during the event in Saskatoon proved too much for Buttar to battle, inevitably sidelining him from competition the last day of the campaign.

Tickets for the event go on sale Friday, May 6 at 10:00 a.m. CST, and start at $25, standard fees may apply, and can be purchased online at Ticketmaster.ca.