2022 Canadian Global PBR Canada Bull of The Year Contenders Announced Ahead of the Canadian National Finals Nov. 11-12 in Edmonton, Alberta 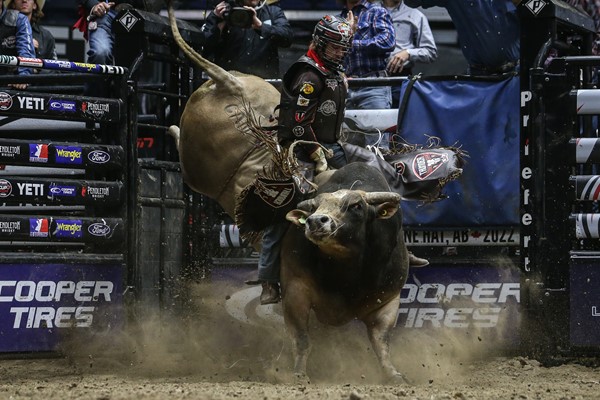 Happy Camper concluded the regular season No. 1 in the Canadian Global Bull of the Year race. Photo: Covy Moore/CovyMoore.com.

EDMONTON, Alta. – PBR (Professional Bull Riders) Canada today announced the Top 7 contenders for the coveted 2022 Canadian Global Bull of The Year honor and accompanying $10,000 bonus to be awarded at the PBR Canada National Finals on Nov. 11-12 in Edmonton, Alberta, at Rogers Place.

The 2022 Canadian Global PBR Canada Bull of the Year will be the animal athlete with the top average score when combining his Top 5 outs from the regular season across all levels of competition and his one out at the 2022 PBR Canada National Finals, presented by Command Tubular Products.

The rank contingent is led by two-time and reigning PBR Canada Bull of the Year Happy Camper, who made history last season inside Rogers Place by becoming the first bovine athlete to win the honor multiple times.

Thus far in 2022, Happy Camper has delivered 11 outs on home soil, crowned the YETI “Built for the Wild” Bull of the Event four times. The “Bucking Sensation from the Two Bit Nation” dominated at the elite Cup Series, presented by Wrangler, events in Brandon, Manitoba; Regina, Saskatchewan; and Medicine Hat, Alberta, in addition to leading the pen at the third Touring Pro Division event held in Calgary, Alberta.

Happy Camper was marked a season-best 45.5 points at the developmental event in Calgary when he upended Jake Gardner (Fort St. John, British Columbia) in a quick 4.38 seconds. Later this season, Happy Camper delivered a monstrous 45-point score at the premier series event in Medicine Hat when he tossed Aussie Callum Miller (Warwick, Queensland, Australia) in 4.47 seconds.

In May, Happy Camper also earned his fifth career selection to the PBR World Finals, where he earned two trips. In Round 3, he was ridden by Kaique Pacheco (Itatiba, Brazil) for 89 points, marked 43.5 points, while in Round 6 he bested 2021 PBR Rookie of the Year Eli Vastbinder (Statesville, North Carolina) in a close 7.78 seconds to earn a 42.75-point score.

Concluding the regular season with a 44.5-point average, Happy Camper will travel to Edmonton with a 0.1-point lead over No. 2 Phantom Fury.

Hailing from Wild Hoggs Bucking Bulls, Phantom Fury is a two-time YETI Bull of the Event from the 2022 season. The bull delivered top outs at the Touring Pro Division stop in Ponoka, Alberta, and the elite Cup Series tour stop in Lethbridge, Alberta, marked 44.5 points both times.

Rounding out the Top 3 is Happy Camper’s pen-mate and fellow Two Bit Bucking Bulls’ star Langham Kid. In contention for his first Bull of the Year honor, Langham Kid concluded the regular season 0.3 points behind the No. 1 rank with a 44.2-point average from his Top 5 trips.

Langham Kid is also a two-time Bull of The Event, earning the honor at the prestigious Glen Keeley Memorial PBR in Stavely, Alberta, and the debut event for the organization in Armstrong, British Columbia.

In Stavely, Langham Kid was scored 44 points via his 2.78 seconds of work against Chance Switzer (Hazenmore, Saskatchewan), while in Armstrong, Langham Kid posted his top score of the season, awarded 45 points when he bested Lonnie West (Cadogan, Alberta) in a quick 1.93 seconds.

The complete list of contenders for this year’s Canadian Global PBR Canada Bull of the Year honor are:

The rider with the highest aggregate score throughout four rounds will win the PBR Canada National Finals event title and a minimum $30,000. With a maximum 180 points available to one rider, the Top 9 riders in the nation are all in contention for the 2022 PBR Canada Championship.