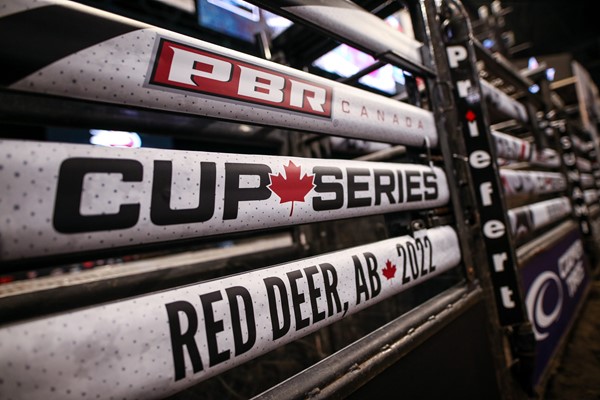 The PBR Cross Country Canada Classic will mark the 2023 season launch for the PBR Canada Cup Series, presented by Wrangler.

In June 2022, PBR Canada’s elite Cup Series debuted in Red Deer to launch the premier series’ seventh season. Compliments of a perfect 2-for-2 effort, Jake Gardner (Fort St. John, British Columbia) won the event, surging from unranked to then No. 2 in the race for the 2022 PBR Canada Championship and accompanying $50,000 bonus.

In Round 1, Gardner first went head-to-head against Tickety Boo (Chase Kesler Bucking Bulls) inside the Peavey Mart Centrium, reaching the requisite 8 for 83.5 points, and punching his ticket to the championship round.

As the penultimate man to leave the chutes, the “Prince of the Peace Country” was poised atop Alberta Springs (Vold Rodeo). In true cowboy fashion, Gardner gritted his way to the 8-second whistle, despite almost being upended seconds into the ride, earning an 86.5-point score to clinch the victory.

As the only other rider to go a perfect 2-for-2, Lonnie West (Cadogan, Alberta) was second, collecting 55 national points to overtake the No. 1 rank in the Canadian standings.

Fresh off his event win the night prior on the developmental Touring Pro Division in Meadow Lake, Saskatchewan, West kept his momentum rolling in Round 1 from Red Deer when he converted aboard Warning Shot (Outlaw Buckers Rodeo Corp.) for 81.5 points. West then remained flawless in the championship round when he covered Hanna Motors Winston Bruce (Skori Bucking Bulls) for 86 points.

Prior to the debut of the PBR Canada Cup Series in Red Deer, the city held two developmental Touring Pro Division events in 2015 and 2016, both won by Garrett Green (Meeting Creek, Alberta).