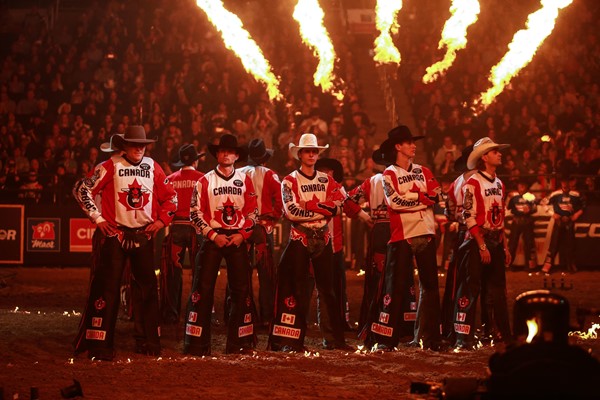 The inaugural PBR Global Cup at Rogers Place in Edmonton made history in more ways than one. Photo by Covy Moore / CovyMoore.com

EDMONTON – Just nine days remain before the beginning of the 2018 PBR Canada Monster Energy Tour. Before we begin year three in Calgary on March 24th, we look back to the highlights from the 2017 season.

Coming in at the No.3 spot is the PBR’s first-ever live TV broadcast in Canada.

Since the first season of the Monster Energy Tour, TSN has been PBR Canada’s broadcast partner, with the only other televised western sport event in Canada being the Calgary Stampede, held annually in July.

Sharing the No. 3 spot on the countdown with the live telecast is the Global Cup event itself. Never before had a bull riding event of this caliber taken place on Canadian soil, paying out $1,000,000 during the three days of competition between the five nations.

With a home field advantage, Team Canada led after night one inside the incredible Rogers Place, home of the Edmonton Oilers.

However, Team USA prevailed over the two-day event to take home the top prize of more than $400,000.

Stay tuned in the coming months for more on the 2018 TSN broadcast schedule and next week for the ninth entry in the countdown, No.2.