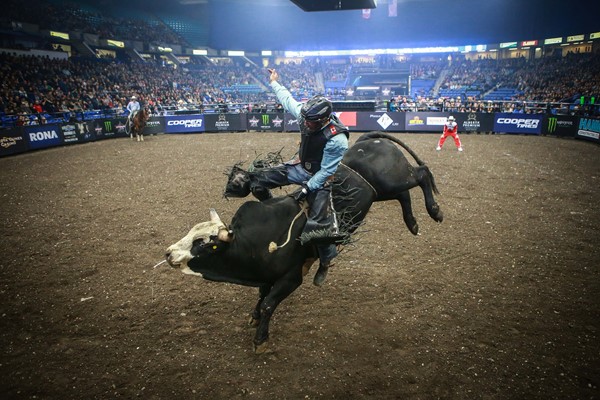 Jared Parsonage is one of four riders that could make history this season as the CPRA and PBR Canada Champion. Photo: Covy Moore/CovyMoore.com.

CALGARY, Alberta – In the 12-year history of PBR Canada, never before has a bull rider won both the PBR Canada Championship and Canadian Professional Rodeo Association (CPRA) title in the same season.

In 2018, that could all change, with four on the verge of making history -- Cody Coverchuk, Lonnie West, Zane Lambert and Abbotsford Monster Energy Tour event winner Jared Parsonage.

Heading into the Canadian Finals Rodeo (CFR), Parsonage leads the standings, while reigning PBR Canada Champion Lambert is No. 3, Coverchuk is No. 7, and West is No. 10

In the PBR standings, Coverchuk leads the field as the No. 2-ranked rider in the nation, followed by No. 4 Parsonage, No. 5 West and No. 7 Lambert.

Mathematically, rookie Nick Tetz is technically in contention, No. 8 in the PBR Canada standings and No. 11 in the CPRA. The same can be said for Wacey Finkbeiner, Garrett Green and Jake Gardner, in addition to Jordan Hansen, who ranked No. 29 in the PBR Canada rankings could mount an incredible come-from-behind win in the PBR to win both titles in the same year.

In previous years, riders have won both titles, but not in the same season. In 2006, Scott Schiffner won the PBR Canada Championship. He won the CPRA title in 2001 and 2012. The only other man to win both was Tyler Thomson, winning the CPRA in 2009 and PBR in 2011.

“That would be cool, that would be a big checkmark for sure off the list,” Parsonage said after capturing his first win on the PBR Canada Monster Energy Tour, in Abbotsford, British Columbia.

“That’s definitely a goal, it’s definitely something I grew up dreaming about as a kid, to be a Canadian Champion in both things, be the best in Canada. It’s one of them things you work for.

“If you aren’t working for that in your career riding bulls, what’s the point of doing it? You want to be the best or find something else to do in my opinion.”

With two events left before the 13th edition of the Monster Energy PBR Canadian Finals in Saskatoon, Saskatchewan on November 23-24, Parsonage is 578.33 points behind PBR Canada Standings leader Lachlan Richardson.

This weekend in Edmonton, the final regular-season Monster Energy Tour event of the year, 550 Canadian points up for grabs, while 425 can be won in Yorkton, Saskatchewan on November 9-10 at the final Touring Pro Division event of 2018.

“I love it when it fills in the fall like this you know, one a weekend, you keep picking away,” Parsonage said of the upcoming schedule. “If you wanna make a living riding bulls you can’t make any money staying at home.”

Parsonage leads the nation with five event wins in 2018 across both tours.

“It’s been good, just staying on,” Parsonage said. “Muddy Water of Carlier’s has treated me pretty good to say the least. When they said that was the re-ride tonight I was like: ‘Yep, for sure, we’ll take that one.’”

Muddy Water from the X6 Ranch in Medicine Hat, Alberta not only helped him to a Round 1 win in Abbotsford, but was the same bull Parsonage won Round 1 on in Magrath, Alberta, the site of his fourth win of 2018.

“Yeah that’s a good bull,” Parsonage said. “He really bucks the first couple rounds and then just kinda levels out. I rode him easy in Magrath and I rode him easy for about seven and a half seconds today, and I was spurring him then I kinda had a little bit of a brain fart there more or less.

“I leaned back a little bit and he bucked me off really right at the whistle,” Parsonage explained.

“I rode him but he bucked me off there right at the whistle and it was nothing but rider error. But geez that’s an awesome bull of Carlier’s. That bull kicks and spins, in the long round you couldn’t ask for anything else.”

In the Championship Round in Abbotsford the lanky Maple Creek, Saskatchewan man rode Ripped at the Seams from Vold Rodeo for the highest score of the night, 87.5 points.

“That was a young bull of Nansen Vold and Nate Gardner’s,” Parsonage said. “They switched deliveries on that bull a little and he hasn’t been out of the left in a while. Nansen said he’s usually out to the left and around to the right, but he was just right there to the left.

“He kinda stalled a little bit and dang sure swallowed himself around there, and he was just good. Then once he come he bucked, kicking and spinning. A guy couldn’t ask for a better one.”

“It’s good to win these, I’ve won lots of events this year but it’s all been the regular Touring Pros,” Parsonage said. “I think this is the fifth event I’ve won this year but the last four have been regular Touring Pros so the points aren’t as big. I’ve won lots but never moved up that far. If I were to win at the right places like this it would make a big difference so these are better to win at.”

Third to Brock Radford and Coverchuk in the Canadian national standings, by 483.34 and 440 points, respectively, Parsonage could technically win the Canadian invite to the PBR’s Real Time Pain Relief Velocity Tour Finals in Las Vegas, however, the date conflicts with the CFR.

“I guess people have different opinions on it, but I’m the season leader in that right now,” Parsonage said of the CPRA. “It’s been my goal for quite a few years to win that so I’m definitely going to the CFR.

“I’m not really worrying about it too much,” Parsonage said when asked about being in contention for the 2018 PBR Canada Championship. “Stay on and you usually place or win.”

He still stuck to his guns when asked what would it mean to win both Canadian titles in same year.

“That would be neat too, but like I said, I’m not really thinking about it too much. I’ve always in my career stuck to it and been a guy that’s rode a lot of bulls and had a high riding percentage. I’m just going to stick to the same thing, just staying on.

“Keep staying on and the rest of it seems to take care of itself.”