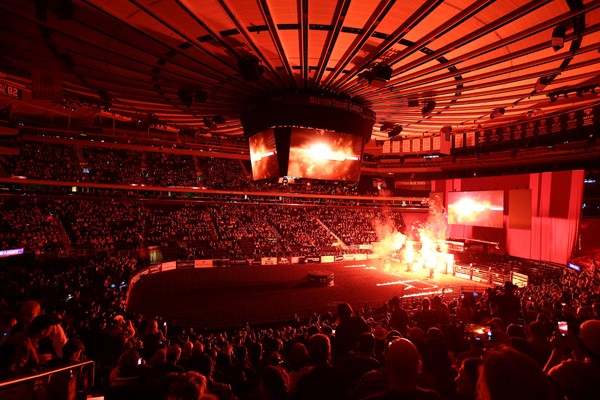 Open ceremonies at the 2017 Monster Energy Buck off at The Garden. Photo by Andy Watson/Bullstockmedia.com

Buttar, who is beginning his second season on the elite tour, finished his 2017 season on tour as the No.26 man in the World Standings having earned $87,055. With eight guaranteed events to establish himself, the Kindersley, Saskatchewan native will look to start his season strong, having finished 17th in his debut event in the city last season.

RELATED: Buttar Ready to Ride in the Big Apple

Byrne, on the other hand, has just three injury exemptions remaining thanks to his top-30 finish in the world standings from 2016.

Last year the Prince Albert, Saskatchewan product finished his partial season in the No.101 spot in the world standings. Byrne looks to regain his place as one of the top bull riders in the world after the best finish ever by a Canadian, at No.8 in 2015.

In the current world rankings, Lonnie West holds down the No.8 having earned 90 world points so far compliments of a win in New Town, North Dakota and a sixth-place finish in Kearney, Nebraska.

While Dueck will remain in the Texas town for both nights of action, Johnston, Robbins and Lonnie West will fly to Oakland, California for the Jan. 6 Real Time Pain Relief Velocity Tour (RVT) stop. Also departing Texas is Bryce West who will drive to Denver, Colorado for the RVT stop on Jan. 8-10.

Canadian-raised bucking bull Canadian Mist, now owned by JW Hart, is featured in the Fort Worth Championship Round both nights.

Concluding the weekend, 13 Canadian riders are in the draw in Denver at the National Western PBR from Jan. 8-10. Set to award $80,000 in prize money, it’s the second-highest paying RVT event of the season next to the finals in Las Vegas.

Radford, fresh off a trip to Australia, has drawn Muddy Water, a bull that bucked off Dayton Johnston at the PBR Global Cup in Edmonton.

The top riders from Round 1 on both Monday and Tuesday compete again in Round 2 and the Championship Round on Wednesday.