No.8 – Robbins Wins Rookie of the Year 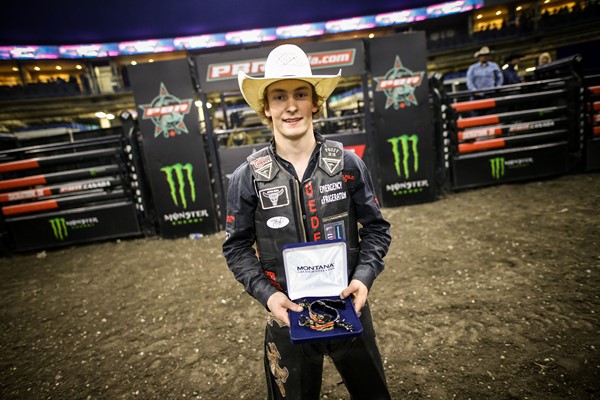 Coy Robbins plans to sit out the remainder of the 2018 season after a disloacted shoulder and broken humorous. Photo by Covy Moore / CovyMoore.com

CALGARY – Less than 30 days remain before the launch of the 2018 PBR Canada Monster Energy Tour. Before we begin year three in Calgary, Alberta on March 24, we look back to the Top 10 moments from the 2017 season.

Coming in at the No.8 spot is 2017 PBR Canada Rookie of the Year, Coy Robbins.

Robbins, of Camrose, Alberta, secured the title over Dayton Johnston after riding Pozzy Time from Wild Hoggs Bucking Bulls for 81 points in Round 2 of the PBR Canada Finals in Saskatoon this past October.

He concluded his first PBR Canada season No. 20 in the national standings, going 2-for-3 in Saskatoon after riding Grey Eyes from the Vold/Prescott firm for 86.5 points in the event’s first round.

Robbins made his PBR debut, at July’s Touring Pro Division (TPD) event in Kinsella, Alberta, where he tied for sixth, after going 1-for-3, making his first qualified ride aboard Regulator for 81.5 points.

Collectively, Robbins went 8-for-17 in his first PBR Canada season for an impressive riding percentage of 47.05%.

The rookie caught the eye of three-time PBR Canada Champion Aaron Roy at an ABBI Canada event in Lloydminster, Saskatchewan in July.

Following his breakout performance at the Canadian Finals, Robbins continued his surge in Edmonton, Alberta, for the inaugural Global Cup. There he quickly caught the attention of Team Australia head coach Adriano Moraes on the back of the bucking chutes as he tried to fight to the 8-second mark on Pound The Alarm during the Monster Energy Team Canada Qualifier.

Robbins began his 2018 campaign in Fort Worth, Texas the first week of January but went 0-for-2. In the first two months he earned one qualified ride in six events and 10 outs.

Unfortunately for Robbins, this season he plans to not compete at any PBR Canada events after yet another injury. This time he had his left arm stepped on causing a shoulder dislocation and broken humorous.

“I'm going to take a year off so that I will be 120% healthy in all aspects and so I don't have further problems with my shoulder popping out,” Robbins said today via text message. “It's going to be a long hard road of recovery, and it's going to be eating at me to get on, but I feel it will be the best for pro longing my career hopefully.”

As Aaron Roy predicted at the inaugural PBR Global Cup, look for Robbins to make his debut at the sport’s highest level in 2019.

Stay tuned this week for the fourth entry in the countdown, No.7.