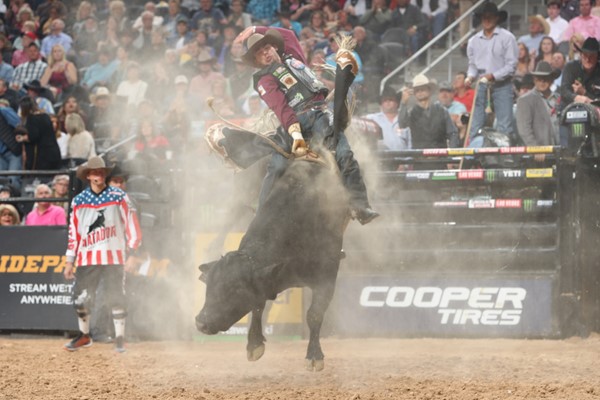 HERBERT, Saskatchewan – In 2018, Canadian athletes, both riders and bulls, accomplished incredible milestones both at home country events and abroad.

With the start of the 2019 PBR Canada Monster Energy Tour a month away, and just five days remaining on the 2018 calendar, we look back at the Top 15 outs of the season for Canadian riders and bulls, both in the Great White North and competing abroad.

No. 15 – Cody Teel Rides Outlaw Buckers’ Brahma Boots Chrome for 90 points in Round 3 of the 2018 PBR World Finals

As one of an historic eleven Canadian bulls selected to buck at the 2018 PBR World Finals, Brahma Boots Chrome was instrumental in Cody Teel’s late surge to the top of the world standings. Bucked off in the first two rounds of the World Finals, Teel rode the Outlaw Buckers’ bovine athlete for 90 points in Round 3, finishing third, to inch within 50.84 points of No. 4 Luciano De Castro. Teel’s impressive rise continued the next evening, winning Round 4 with a 90.25-point trip on Medicine Man. He concluded the year a career-high No. 3 in the world standings. For Brahma Boots Chrome, he was marked 44.25-points for his trip, the best of his two outs at the event.

Originally hailing from Girletz Rodeo Stock, Stuntman Ray, now of Broken Arrow Bucking Bulls, was a key draw in Marco Eguchi’s run to the World Finals event title. After riding Spotted Demon for an event-best 94 points in Round 2, Eguchi kept his good momentum rolling in Round 3 when he rode Stuntman Ray for 91 points to tie for the round win. At the end of the five-day event, Eguchi’s 5-for-6 effort propelled him to his first World Finals event win and allowed him to finish the year a career-high No. 5 in the world. For Stuntman Ray, the appearance was his second at the World Finals. Marked 44.25 points for his trip against Eguchi, Stuntman Ray returned in Round 5 when he was ridden by Claudio Montanha Jr. for 88.75 points, earning a 43-point bull score.

Raised by the Flying High Rodeo Company of Elnora, Alberta and now with K-C Bucking Bulls, Bad Touch has yet to be ridden in 42 outs on record.

In 2018, he made nine trips on the elite tour, including two outs at the World Finals. He was twice marked a season-high 43.5 points for his 2.11-second trip with Guilherme Marchi in January in New York City, followed by a matching score in Round 2 of the World Finals when he dispatched Valdiron de Oliveira in 2.79 seconds.

Coming in at No. 12 is another 90-point ride on Brahma Boots Chrome. This one, however, was special on more than one account. It was the first 90-point ride ever recorded aboard the bull and also the first 90-point ride of Dakota Buttar’s career on Canadian soil. The 8-second effort took place at the Ranchman’s PBR BullBustin’ in support of Canadian Mental Health Calgary, presented by Victory Lab, and allowed Buttar to capture his first event win of the season.

Buttar concluded the year claiming his second consecutive Glen Keeley Award, finishing a career-high No. 17 in the world. Brahma Boots Chrome finished the year with an equally impressive set of accolades. He was one of four bucking bulls to accomplish the Canadian Triple Crown in 2018, bucking at the Canadian Finals Rodeo, PBR World Finals and National Finals Rodeo.

While this is the second and last entry for the bull, it is Buttar’s first of three appearances on the countdown.

With just three 90-point rides recorded on Canadian soil in 2018, two belonged to two-time PBR Canada Champion Zane Lambert. The 32-year-old recorded the first of the season en route to capturing his second consecutive win at the Glen Keeley Memorial PBR in Stavely, Alberta. Entering the championship round second in the aggregate, Lambert used a monstrous 90.5-point ride aboard Two Bit Bucking Bulls’ Happy Camper to surge to the win. Lambert is only the third different rider to cover the bovine athlete who concluded the season as the 2018 PBR Canada Bull of the Year and Bull of the Monster Energy PBR Canadian Finals.

With hundreds of outs taking place at the nine PBR Canada Monster Energy Tour events held in 2018, Twisted recorded the top-marked score of all bulls that bucked on the tour, marked 46 points at the second international Major in Québec. Competing inside the Videotron Centre for PBR Canada’s Iron Cowboy this past May, the Vold Rodeo bull earned the top score for his 2.15-second buckoff of Brock Radford in the final round. His efforts, the best of his career, earned Twisted the bull of the event honors.

RELATED: Twisted Awes in Québec with Career Best Out

Next up is another stateside out from a Canadian bull. The bull is Canadian Mist, originally from Nansen Vold and the rider, 2017 World Champion Jess Lockwood. In Tulsa, the two matched moves for 91.5 points leading Lockwood to the 15/15 Bucking Battle win. The out was Lockwood’s high-marked score of 2018.

Wrapping up this half of the countdown is the other 46-point bull score of the season, Two Point Oh at the Glen Keeley Memorial in Stavely. The bovine athlete earned the scored for his 4.69 seconds of work against Australian Lachlan Slade. Also making a trip to the 2018 PBR World Finals, bucking in both Round 3 and Round 5, he was sold to Gene Owen and will now make his home in the United States bucking at the PBR’s elite level.