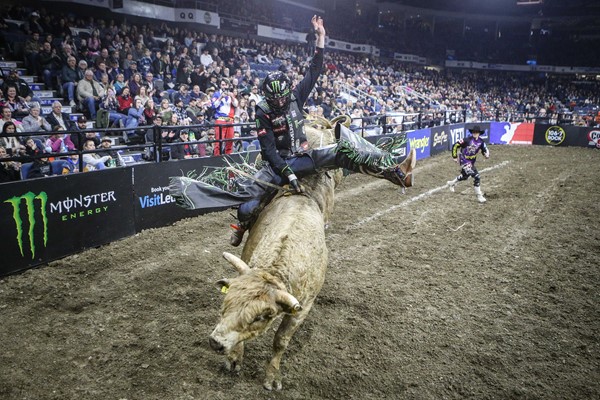 Tanner Byrne rode One for the Money for 86.5 points in Round 2 of last weekend's Canadian Monster Energy Tour event in Lethbridge, Alberta. Photo: Covy Moore/CovyMoore.com.

DULUTH, Georgia – And then there were two.

After Dakota Buttar was the lone Canadian at last weekend’s Unleash The Beast event in Little Rock, Arkansas, this weekend, for the U.S. Border Patrol Invitational in Duluth, Georgia, the Canadian contingent will increase by one with Tanner Byrne also set to travel stateside.

For Prince Albert’s Byrne, he competed in his home country last weekend after slipping outside the Top 35 in the world.

Despite falling short of the win, Byrne notably recorded the high-marked ride of the event when he won Round 2 with an 86.5-points ride on One for the Money.

But for Byrne, Duluth is a city where he has experienced great success.

In 2016, Byrne went a perfect 3-for-3 to earn the second elite tour event win of his career. Should he win this weekend, he would become the first rider in league history to win multiple events in the city.

Awaiting him in Round 1 is Slip Out. From Torres Brothers Bucking Bulls, the bovine athlete has been ridden four times in 8 outs across all levels of competition. The last rider to reach the 8 aboard him was Alex Marcilio inside Duluth’s Infinite Energy Arena last season, covering him for 85.75 points in Round 2.

The Round 1 out will be Slip Out’s first of the season. He last bucked in Atlantic City in September 2018 when he dispatched Nathan Burtenshaw in 5.08 seconds to earn a 41.5-point bull score.

Buttar will also enter the Duluth event with success at his back. Last weekend in Little Rock, Buttar earned his first round win of 2019 when he took the top marks in Round 1 after riding Handsome Jeff for 89.75 points.

The Kindersley native concluded the event fifth to earn 110 world points. The Top-5 finish, his first of 2019, allowed him to gain notable ground in the world title race, rising from No. 33 to No. 23.

In Round 1 of this year’s U.S. Border Patrol Invitational, Buttar will look to improve upon his 0-for-2 showing in Duluth last season.

In 10 outs, all of which have been on the elite Unleash The Beast, Maximum Risk has been ridden four times. In his last out, Claudio Montanha Jr. rode the bull for 84 points in Round 2 at the season-launch Major event in New York City.

CBS Sports Network will broadcast all the action from Championship Sunday on Sunday, March 10 at 9:00 p.m. ET.

Fans will be able to watch the action in its entirety live via PBR’s new streaming digital platform RidePass. Round 1 will be exclusively seen on the platform, with coverage beginning at 7:30pm EST on Saturday, March 9. The listen LIVE stream of the final rounds will begin on Sunday, March 10 at 1:45 p.m. EDT.