West Remains in Title Contention Despite Slow Start to 2019 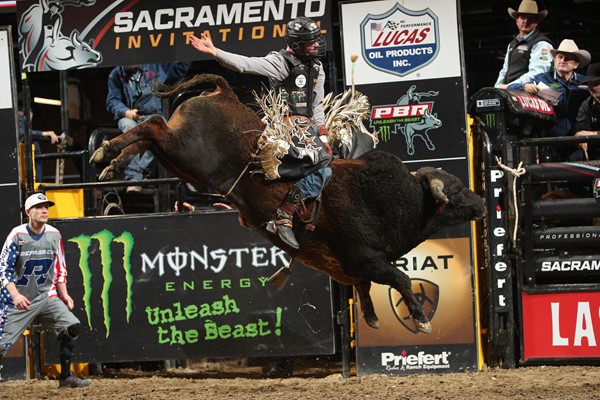 Lonnie West is currently No. 9 in the PBR Canada national standings as the season winds towards the finals on Nov. 22-23 in Saskatoon, Saskatchewan. Photo: Andy Watson/Bull Stock Media.

CALGARY, Alberta – While the 2018 and 2019 seasons for Lonnie West have chronologically played out differently, both had their trajectories significantly altered by injury.

In 2018, West made his debut at the PBR’s elite Unleash The Beast in Billings in April, finishing eighth overall, returning that August for the annual event in Tulsa reaching a career-high world No. 24 ranking after earning a fourth-place result.

After competing on the Unleash The Beast again later that month at the Major in Nashville, West had his run to his first World Finals dampened when he dislocated his shoulder on the Touring Pro Division in Montana, Eureka on August 25.

West did not ride again until Round 2 of the 2018 PBR World Finals when he made his debut at the most prestigious event in bull riding as an alternate.

In Las Vegas, West lacerated his liver after being stepped on by Hostage in Round 2, sending him to the side lines until the PBR’s premier tour returned to New York City in January.

The 23-year-old bull rider competed for a month, but then broke his leg at the 2019 PBR Global Cup USA in Arlington, Texas.

While he was back two months later in April, West didn’t have success until August 21 when he rode to his first PBR victory of 2019 in Coronation, Alberta.

Two weeks later, on September 5, West was back in the winner’s circle, clamming his second event victory of the 2019 PBR Canada season in Magrath, Alberta.

With an outside chance of winning the PBR Canada Championship, and the accompanying $50,000 bonus, West is also in a unique position to potentially make a return to the PBR World Finals.

How -- injury exemptions to the PBR’s elite Unleash The Beast, which he’s used to of so far, including to compete in Nashville and this past weekend in Anaheim.

“It was a good weekend nonetheless, I rode my bulls like I wanted to,” West said of the Magrath-Anaheim combo between Thursday and Saturday. “It was really good to get another win out of Magrath, because I just kinda been having a subpar summer and I really didn’t have the winter I wanted.”

West’s win in Magrath included a 79-point ride on Flick The Switch in Round 1, and 83.5-point score on Fidgit Spinner in the championship round.

“It’s nice to climb back into the top ten with my win at Magrath,” West said of the Canadian standings in which he finished No. 7 in 2018. “It wasn’t nothing pretty but all I could do is ride my bulls so it all worked out for me. I kinda have a goal for the end of the year is to get into the Top 5 for the PBR Canada Finals.”

In Anaheim, despite riding Diamond Willow for 85 points in Round 1, West sustained a concussion during his dismount, ending his pursuit of the Anaheim buckle.

He concluded the event 17th overall.

“I was super pumped about that, cause I had seen him, I think he threw Jess [Lockwood] off in Deadwood and I hear he was good,” West said of riding his first round match, Diamond Willow. “I just got slammed on the ground and hit my head. I had to go do my tests with Tandy and he got on the concussion protocol right away and said I had a concussion.”

“As shitty as it is to give up a bull at that level, especially when you are in a position for an event win, I think I made the right move anyways, I’m feeling good, now so I didn’t want to jeopardize anything coming up next week either.”

On tap this weekend is the Canadian Touring Pro Division event in St. Tite, Québec and a rodeo in Olds, Alberta.

“Two events that can help me get to the finals that I want to get to at the end of this year, so that is what we are shootin’ for anyways,” West said. “And then I am gonna try and get down to Wacey [Finkbeiner’s] wedding after Olds, so we will be going like crazy this weekend.”

As one of the most unique western events in the world, 2019 marks the return of PBR competition to St. Tite in a number of years.

“I am pretty excited to go to St. Tite, I have heard a lot of good stuff about it and never had the chance to go,” West said. “Now that it is a PBR, it’s gonna be bad ass, I just hope I make it back from the east, sometimes they can get a guy stuck out there.”

After St. Tite, the PBR Canada schedule winds down with one event, Grande Prairie on October 5 remaining on the TPD schedule and two, Abbotsford on the October 19 and Edmonton on October 26, on the Monster Energy Tour before the World Finals.

For West, a berth to the World Finals isn’t out of his sights just yet with three exemptions left at the highest level where the most points are available. Next on the radar is Minneapolis on October 4-5.

“A guys still got a good shot, I mean it’s definitely a long shot this year to make World Finals cause things just haven’t been rolling like I wanted, but it is still very possible,” West said. “Especially with Abbotsford and Edmonton, I think that really helps us, so, yeah just kinda rolling with the flow now and going to everything.”