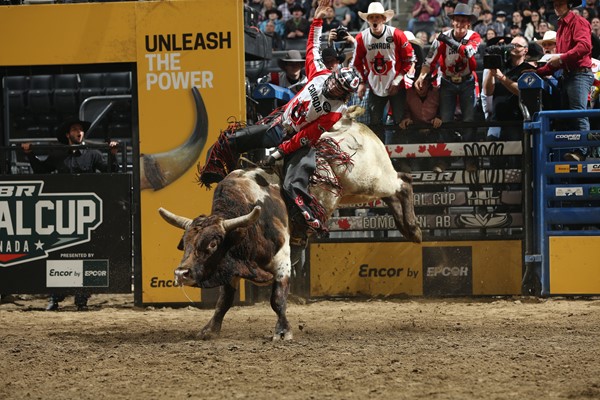 NEW YORK CITY – When the PBR launched the Global Cup on Canadian soil in November 2017, the bull riding world was forever changed.

With countless head-turning moments happening inside Rogers Place in Edmonton, Alberta, numerous firsts were also being had for the league, including the first-ever LIVE PBR Canada telecast on TSN.

More than 100 outs were witnessed across the three days of competition, including the Canadian qualifier, however one carried unparalleled sentiment, especially to the host nation – Lonnie West vs. Pound The Alarm.

While West was just beginning to establish a global name for himself, Pound The Alarm had long been a top bucking bull, both in Canada and the United States.

From the Alberta-based Wild Hoggs outfit, 2013 PBR Canada Bull of the Year Pound The Alarm had only recently returned to Canada in January 2017 after bucking for Gene Owen and Jimmy Roth the several seasons prior on the elite Unleash The Beast.

“We was really proud to have him,” Owen said. “He turned into a big pet, but he never slowed down bucking. He was as good as long as he could be.”

In the months leading up to his memorable trip at the Global Cup, Pound The Alarm, once again with the Wild Hoggs, bucked at nine events across all levels of competition in Canada.

He notably competed at the 2017 Calgary Stampede when he was ridden by Sage Kimzey for 87.5 points en route to the Oklahoman’s win at the iconic event, and the PBR Canada Finals when he was covered by Dakota Louis for 85 points.

“He’s had a great career and is starting to slow down a little bit,” Justin Volz of the Wild Hoggs said following the Global Cup.

“He had two good trips up at the Global Cup and we figured it was time to call it a career. He can live it out with the ladies.”

In what would be his penultimate trip, Pound The Alarm bested the season’s Canadian Rookie of the Year Coy Robbins in a close 7.37 seconds. Earning a 43-point bull score, Pound The Alarm was the top-marked bull of the Canadian qualifier.

Then came his final trip.

Matched up in Round 2 of the Global Cup, Lonnie West climbed aboard Pound The Alarm more determined than ever to make the 8-second whistle in an effort to keep Team Canada atop the event leaderboard.

With his countrymen loudly cheering him on from the back of the bucking chutes, West and Pound The Alarm teamed for an out that brought the electric crowd inside Rogers Place to its feet. Reaching the whistle, West was marked 86.5 points, with Pound The Alarm contributing 42.5 points.

In 59 recorded outs at all levels of competition on Pound the Alarm, 20 resulted as qualified rides.

Two years later, in November 2019, Pound The Alarm passed away due to natural causes.

“Pound he did us well, very well, he did Gene Owen well and he also did the PBR well,” Wild Hoggs partner Corey Chmelnyk added. “He represented Canada very well. He was a top bull for a long time in Canada and made it to the world finals and did very well there. There was really no lost time with him, right until he retired.”

And Pound The Alarm’s legacy lives on, namely in son Tykro Pound Sand who has proved integral to the success of many riders, including Daylon Swearingen’s march to the 2019 PBR Canada Championship.

Fans can relive all the action from the 2017 PBR Global Cup Canada, including West’s trip aboard Pound The Alarm, on RIdePass at RidePass.com or via the mobile app.