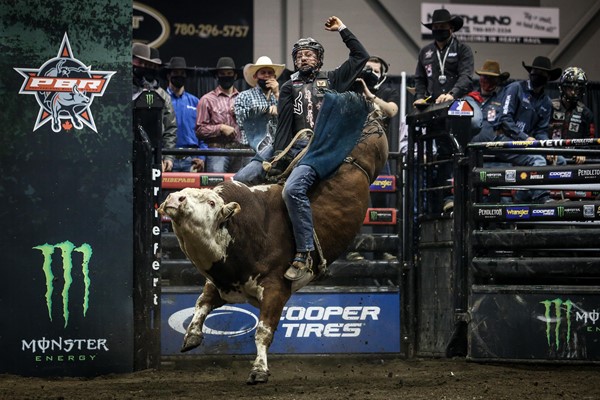 NEW YORK CITY – While their outs may have been limited, Canada’s rankest bovine athletes shined in 2020 delivering numerous trips that won’t soon be forgotten.

As the 2021 season nears ever closer, we look back at the Top 5 bull scores recorded this past season on the elite Monster Energy Tour.

While he may have finished third in the Bull of the Year race, there was no bull more rank than Vold Rodeo’s Timber Jam in Grande Prairie, Alberta, for the 2020 PBR Canada Monster Energy Tour Finals Week.

Earning two outs at the season-culminating event inside Revolution Place, Timber Jam posted two of the Top 5 scores logged by a bovine athlete on the elite Monster Energy Tour throughout 2020, including the best marks of the year, a 45-point score for his 3.43-second buckoff of Shay Marks in the PBR Shell Rotella Challenge.

The bovine athlete also recorded two of ten 44-point bull scores logged on the Monster Energy Tour in 2020. He earned the marks compliments of his 3.2-second buckoff of Kache Mooseman in Lethbridge and for his 4.62-second buckoff of Jake Gardner in Grande Prairie.

No. 2 (tie) Catch My Drift (Two Bit Bucking Bulls/K Rose Ranch) marked 44.5 points for his 2.71-second buckoff of Tanner Eno and for his 3.19-second trip with Coy Robbins in Grande Prairie

Ending the regular-season No. 4 in the standings with a 43.33-point average from his Top 3 outs on Canadian soil, Catch My Drift was propelled to his first-ever Bull of the Year title courtesy of matching 44.5-point scores during the 2020 PBR Canada Monster Energy Tour Finals Week, tying for the second best scores of the season on the Monster Energy Tour.

On the first night of action for the season-culminating event, Catch My Drift scored the marks when he dispatched 2017 PBR Canada Rookie of the Year Coy Robbins in 3.19 seconds.

Delivering the high-marked out of the event, Catch My Drift clinched the prestigious year end honor on the final day of the season when he made quick work of Tanner Eno in the PBR Built Ford Tough Championship, sending the young gun to the dirt in 2.71 seconds.

The powerful bovine concluded the year with a league-best 43.8-point average to earn the $2,500 bonus.

“It was awesome,” Two Bit Bucking Bulls’ Josh Berezay said. “Catch showed up and showed that he was tired of being second.”

No. 3 (tie) Happy Camper (Two Bit Bucking Bulls) marked 44 points when he was ridden by Lonnie West for 90 points and for his 7.62-second buck off of Nick Tetz in Grande Prairie

Despite falling just short of what would have been his historic second PBR Canada Bull of Year honor at the 2020 PBR Canada Monster Energy Tour Finals Week, finishing No. 2 in the race for the second consecutive season, Happy Camper still turned heads in Grande Prairie.

Bucking twice at the season-culminating event, the striking bull registered two 44-point scores, first when he was covered by Lonnie West for 90 points, and later in the week when he dispatched Nick Tetz in 7.62 seconds.

“You try and raise great bulls and when you get one, they’re special,” Berezay said of 2018 PBR Canada Bull of the Year Happy Camper. “He showed from the time he was a calf that he was special, but he put an exclamation mark on it when he won it. We were over the moon about it. He has the heart of a lion. He has a big heart that bull.”

At the 2020 PBR Canada Monster Energy Tour Finals Week, not only did the qualifying riders delivering jaw-dropping feats of athleticism, but so did the bulls.

One of those impressive trips was registered by Vold Rodeo’s Trapped when he squared off against Okotoks, Alberta’s Jordan Hansen.

Getting the better of the accomplished Albertan rider in 6.68 seconds, Trapped concluded the 2020 season with a career-best, 44-point bull score.

“I think he has the potential at a run at a World Championship,” Vold said of the bull after he bucked earlier in the season on the elite Unleash The Beast in Billings, Montana. “He is consistently getting better each trip.”

Now calling the United States and Kruger Bucking Bulls home, Big City Nights is one of the multitude of talented Unleash The Beast-caliber bovines that was raised in Canada.

A standout bucker from the nation, Big City Nights was one of the star bulls from the Canadian Monster Energy Tour’s triumphant return to competition in July when the league held two events in Lethbridge, Alberta.

Matched up with Wyatt Gleeson, the Vold Rodeo-raised bull sent his human counterpart to the dirt in 4.13 seconds as he registered one of the tour’s ten 44-point bull scores.

No. 3 (tie) Homegrown (Eno Bucking Bulls) marked 44 points when he was ridden by Jared Parsonage for 89.5 points in Lethbridge, Alberta

After winning the 2019 PBR Canada Bull of the Year title, Homegrown began the 2020 season in equally dominant fashion.

As his second out of the new season on home soil, Homegrown was one of the 10 bulls selected for the championship round of the second Monster Energy Tour stop in Lethbridge, Alberta. Drawn by Jared Parsonage, the stoic Saskatchewan man took the powerful Eno Bucking Bulls’ bovine to the whistle for 89.5 points, as Homegrown registered one of the ten 44-point bull scores that would be recorded on the tour in 2020.

““He’s a steady Eddy,” Darrin Eno said of his bull. “That’s him. If you take all his trips and you look at him, they’re all pretty close.”

No. 3 (tie) One for the Money (Vold Rodeo) marked 44 points for his 5.71-second buckoff of Callum Miller in Lethbridge

Now of Slater, Missouri’s Kruger Bucking Bulls, One for the Money is one of the countless rank bovine athletes to emerge from the heralded Vold Rodeo outfit.

Relocating to his new home in the United States in September, One for the Money caught the eyes of many compliments of his dominant outs in Canada.

One of those trips was his 44-point effort with Australian young gun Callum Miller in March at the sold-out event in Lethbridge, Alberta after he sent the cowboy to the dirt in 5.71 seconds.

No. 3 (tie) Vertigo Spy (Vold Rodeo) marked 44 points when he was ridden by Garrett Green for 88.5 points in Lethbridge

While the year concluded when the bovine athlete bucked twice at his career-first PBR World Finals, it started with a head-turning trip on home soil for the second Monster Energy Tour event of the season.

Marking his third trip of the year, Vertigo Spy was sensational in Lethbridge, Alberta inside the ENMAX Centre. Drawn by surging Albertan Garret Green, the two combined for an 88.5-point score as Vertigo Spy was marked 44 points.

“He is full bodied, well-structured in the front end and the back end is a little tighter,” Vold said further of the bull. “He has that speed and whip that you really want. He turns back in the gate and really gets it on.”

No. 3 (tie) Tykro Pound Sand (Wild Hoggs/Corey Chmelnyk) marked 44 points when he was ridden by Dakota Buttar for 87.5 points in Calgary, Alberta

While the Dakota Buttar and Tykro Pound Sand would match-up a collective four times throughout 2020, it was their first meeting when he bovine athlete shined the brightest.

Drawing the Wild Hoggs bull in the championship round of the first tour stop of the year in Calgary, Buttar reached the whistle for 87.5 points en route to his event victory, with Tykro Pound Sand marked 44 points.

“When I saw the short round list that’s the one I wanted in there,” Buttar said of Tykro Pound Sand immediately after the event. “I got on him a couple years ago and I rode him, but he had me loosened up at the end so I didn’t ride him as strong as I wanted to. “

“About halfway through there he’ll start moving ahead quite a bit and if you’re really pumping over there, he can drop you in, or if you’re not there enough, he’ll get you to the outside and throw you out. You’ve got to be right in the middle and patient, but you’ve got to be there too at the same time.”

No. 3 (tie) Come on Over (Vold Rodeo/Prescott) marked 44 points for his 5.21-second buck off of Miller in Calgary

While Come on Over may now reside in the United States, part of the rank Hart Cattle Co. and TNT Bucking Bulls contingent, he originally hails from Ponoka, Alberta’s Vold Rode. And before he moved to his new home in Oklahoma, Come on Over logged one of the top bull scores of the 2020 Monster Energy Tour.

Bucking just twice on home soil during the 2020 competition season, Come On Over turned heads in Calgary for the season-launch Monster Energy Tour event. Matched with Miller, the bull was marked 44 points as he sent the Australian sensation to the dirt in 5.21 seconds.