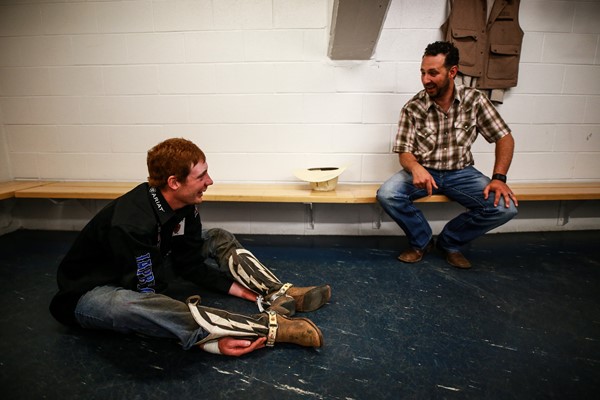 TORONTO – After battling a laundry list of injuries this season, Tanner Byrne made the decision following the August Built Ford Tough Series (BFTS) event in Nashville to remain on the sidelines recovering until PBR’s inaugural Global Cup in his home country on Nov. 9-11.

However, all of that changed Monday morning when Byrne received a call inviting him to compete at this weekend’s Real Time Pain Relief Velocity Tour (RVT) Finals.

“It came totally out of the blue and I wasn’t even expecting to get the call or the invite to go to the Velocity Finals.”

“I figured my 2017 was a complete and total write off, so I was just going to start fresh at the Global Cup. So when they called this week to go to Vegas for the Velocity Finals I was super pumped.”

“Not only is that an awesome event that I enjoy being at and wanting to win at, but if you do good enough you can even qualify into the World Finals.”

“I can’t even explain how cool that is with not being able to go to many this year, and having a brutal year, and still having the chance to win a bunch of money and make it to another World Finals.”

“You don’t get better than that.”

For Byrne the itch to return began to creep up on him while at the 2017 PBR Canada Finals last weekend in Saskatoon, Saskatchewan.

“It got me really pumped up and I didn’t know I was going to get invited to the Velocity Finals until Monday, so when I was in Saskatoon it was just getting me pumped for the Global Cup and being a part of that,” Byrne said.

“Seeing the bulls and seeing the guys rolling and staying on and making good rides, the crowd pumping and everybody being fired up it rejuvenated me and reminded me why we do this.”

For Byrne his season was put on hold before it even began when just days before the season-opening BFTS event in New York City, he was stepped on in a practice pen, breaking both his collarbone and shoulder blade.

“That was brutal,” Byrne recalled.

“By the time I got movement back in my arm and my shoulders feeling good to do it again it was two months.”

He made his season debut on Feb. 18 at Last Cowboy Standing in Arlington, Texas, but in just his second event suffered another season derailing injury.

“First round I get on my bull and got hooked in the leg,” Byrne said of his Round 1 out in St. Louis aboard Johnny.

“I felt a pop in my groin and [Dr.] Tandy [Freeman] told me to take a couple of weeks off.”

“I got on Catfish John and in the first jump everything just went to heck,” Byrne recalled.

“I tore the two [groin] muscles on my left side completely off the bone and the two muscles on my right side were partially torn also.”

“That was about six months there and I didn’t really know if I would be able to come back from that. That’s a big part of our sport is our groin, so to lose them is unreal.”

But Byrne couldn’t be kept away, rehabbing diligently for months with a team in Calgary that work intimately with hockey players who suffer from similar injuries.

“I went to physio and I was determined to get them strong,” he said.

“When you tear something in your knee you have to get everything else in there even stronger and that’s what I did.”

RELATED: Byrne Gets Back to Work on Built Ford Tough Series

The Prince Albert, Saskatchewan rider would return for PBR Canada’s Touring Pro Division event in Calgary, Alberta on June 14, riding at 16 events before succumbing to a fractured wrist.

“At the Calgary Stampede I broke my wrist and that progressively got worse,” Byrne said.

“I started fighting it out and went back to the second half of the [BFTS} season and into Tulsa and Nashville and knew it didn’t feel right and Tandy told me to go home and get x-rays.”

“So I went home and got x-rays, and there was a broken bone in there.”

But after his latest more than two month recovery period, Byrne says he’s in tip-top shape.

“I’ve been in the gym and honestly I feel better than I have in the last year, two years, so I’m in really good shape, have a really good mindset again and ready to get back to my winning ways. “

“I’ve been busy in Prince Albert, my hometown, with physio, which has been really great for me,” he said of his rehab plan.

“I’ve been putting [my wrist] through the grind to. I laid 18,000 feet of sod yesterday for my new house, so I put the grind on it, I put the work on it, and it didn’t bother me one bit.”

Collectively Byrne was sidelined for five months by his various injuries.

“I think it’s just been one of those years where things have gone bad, and hopefully that was all just a bunch of setbacks for something good,” Byrne said optimistically.

“I’ve been ready to get back to my winning ways, and ride like I know I can ride, not the way that it went this year, and I think a lot of that had to do with injuries.”

“I’m not worried about my bull riding or my skill, I know I’ve got what it takes, I’ve proved that in the past years,” he said confidently.

“Injuries are a part of this sport, and it was just one of those years for me. I’ve been out of the circle and I’ve been out of the top for a long time and I’m ready to get back in there and prove to myself and everybody once again who I am and why I have the accomplishments that I’ve had.”

Despite his readiness to return to action, Byrne believes he was well served by the time away from competition.

“It’s one of the first times this year that I have been pumped up to get on,” Byrne said.

“Every time I’ve come back I’ve had something in the back of my mind, whether it was the death of Ty Pozzobon or whether it was injuries. I didn’t have 100% faith in myself when I was coming back that I was feeling good, there was always issues. So this is the first time really all year that I’ve been pumped to go.”

“It kind of just got me rejuvenated, refreshed,” he elaborated.

“It made me sit at home and realize not to take advantage of being a PBR bull rider on the Built Ford Tough Series and to take full advantage when I have the opportunity to be there. It got me back to square one and got me to want it more than ever actually.”

In Round 1 of the RVT Finals Byrne will face Huckleberry, and he is “ready to ride.”

And Byrne believes he has already received one good omen for his return this weekend.

Immediately after accepting the invite, Byrne booked two round trip airline tickets to Las Vegas, Nevada for an unheard of $250.

"I thought it must have been a sign," Byrne said.

Tickets start at just $25 and can be purchased online at Ticketmaster.com.