No. 1 – Lambert Makes History in Saskatoon 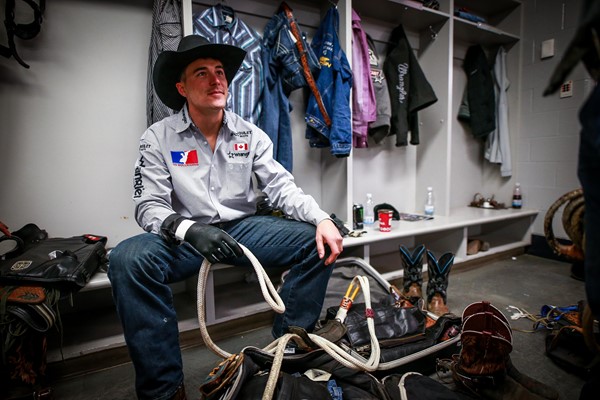 Zane Lambert takes a moment before he competes in the final day of the 2017 season where he would be the eventual champion. Photo by Covy Moore / CovyMoore.com

SASKATOON, Saskatchewan – One day remains before the beginning of the 2018 PBR Canada Monster Energy Tour. Before we begin year three in Calgary on Saturday, March 24, we look back at the Top 10 moments from the 2017 season.

Coming in at the No. 1 spot is Zane Lambert making a come-from-behind push at the 2017 PBR Canada Finals to win the event title, where he called his shot and nearly the exact score in Round 2, completing the comeback to claim his second national title.

In one of the tightest races in PBR Canada history, Lambert edged No. 2 Brock Radford for the title by 645.84 points, becoming just the second rider to earn multiple national titles in the league’s tenure in the country.

Having never led the standings season long, the 31-year-old veteran entered the final event of 2017 No. 2 in the national standings, 379.16 points behind No. 1 Brock Radford.

“I was able to do something I wasn’t able to do in the past years and that’s ride bulls away from my hand,” he said at the Canadian finals.

While Radford’s ride had the crowd on their feet, the moment that has since become iconic came earlier in the night during Lambert’s post-ride interview following his first-round ride.

Having seen Crooked Nose numerous times that season, Lambert declared he would ride the Vold Rodeo/Prescott bull for 88 points.

While close, when the scores were tallied on Saturday night, Lambert was awarded 87.5 points on the bovine athlete to win Round 2.

“You don’t buck Brock Radford off two times in a row very often, so I expected him to put another score on the board. I wasn’t letting up and even though he bucked off, I wasn’t thinking about that, I was just focused on Crooked Nose at that time and making sure I didn’t stub my toe on that bull and making sure I rode him.”

While Lambert would also buck off his draw, Flying 4 Bucking Bulls’ Evil Genius, his standing in the event, in tandem with Radford and West’s buck offs, propelled Lambert to the title, unbeknownst to him.