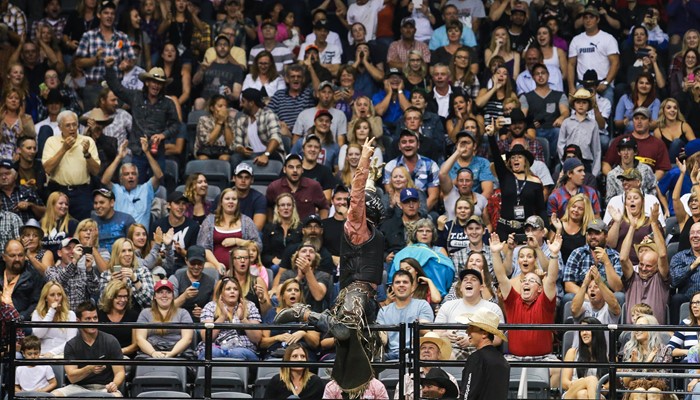 While the league had hosted events in the nation since 1996, the 2016 season brought the launch of a new series – the Monster Energy Tour.

“PBR fans in Canada are among the world’s most passionate and informed,” said Sean Gleason, CEO of PBR, at the time of the announcement. “These fans, along with riders, stock contractors and other stakeholders in our sport, deserve a cohesive national series. “

In addition to marking the first unified competitive PBR series that would travel the nation of Canada and be televised throughout the season, the Monster Energy Tour also brought riders newfound competitive opportunities, while simultaneously taking the sport to new locales.

“It is huge,” Canadian Champion Zane Lambert added. “It is something that I have always wanted to be a part of. We want to be able to let a Canadian kid make a living at it, get ahead and be successful.

“There are a lot of people putting a lot of effort into it. I have seen it for a long time in the United States and I have always wanted to be a part of that and bring it back to Canada. It is huge, we all are trying to make it better for the next guy or the next athlete coming up.”

The Monster Energy Tour made five stops in 2016 before culminating in Saskatoon, Saskatchewan for the Canadian Finals.

Launching in Ottawa, Ontario on August 20, marking the first time the city had hosted a PBR event since 2012, Brant Atwood was the top performing rider at the first-ever Canadian Monster Energy Tour event.

Remaining in Ontario, the Monster Energy Tour next travelled to London with the city also welcoming the PBR for the first time since 2012.

This time, however, it was Reese Cates who took the event title with a 2-for-2 showing.

Despite not being the event’s winning rider, Brock Radford also delivered a performance in London that won’t long be forgotten by PBR fans around the globe.

Covering Minion Stuart for 88 points in the championship round, the high-marked ride of the event, Radford’s trip ended up with him bucked over the fence and out of the arena.

Following a stop in Winnipeg, Manitoba, won by Matt Werries, and a trip to Calgary, where Brady Sims emerged victorious, the Monster Energy Tour visited Abbotsford, British Columbia for the final regular-season event of the year.

And not only was the Abbotsford event the final stop before the Canadian Finals, but it was also the first event where a Canadian would ride supreme.

Covering Big Tymer for 85.5 points and Johnny Ringo for 89 points, Ty Pozzobon won the event in front of a home province crowd at the Abbotsford Centre.

“I really can't explain how much that win meant,” said Pozzobon following the win. “To have all my family and friends there supporting me was great, it is a nice feeling to know you have so much support. It was extra special with them being there because they have supported me through it all.”

RELATED: Pozzobon Blazes a Unique Path to the World Finals

While Zane Lambert earned the coveted event win, Pozzobon, who had been seemingly unstoppable season long, won the 2016 PBR Canada Championship and $25,000 bonus.

In the seasons since the Monster Energy Tour’s inaugural year of competition, the bull riding series has only continued to grow.

With its broadcast home still on the TSN, Monster Energy Tour action has remained on television, with the TSN family of networks continuing to bring coverage through 2020.

And while the 2020 season, the fifth year of operation for the Monster Energy Tour, remains amidst an unprecedented hiatus, the memorable moments are sure to flow once competition resumes.

“When we get going again, you’re going to see the best bull riding you have ever seen in the history of the sport,” 2015 PBR Canada Champion turned bullfighter Tanner Byrne said.