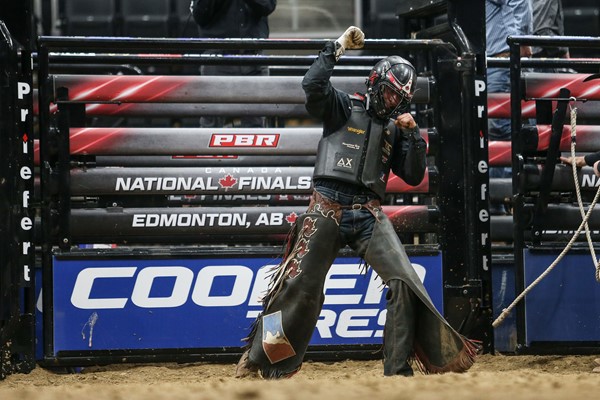 The 2022 PBR Canada Cup Series will get underway on April 23 in Winnipeg, Manitoba. Photo: Covy Moore/CovyMoore.com.

NEW YORK CITY – With the 2022 season on the near horizon in Canada, the bull riding world is still abuzz about the record-setting year that was 2021.

While we have already looked back at the Top 5 ride and bull scores, and the best bovine athletes and moments of the year, we would be remiss to not highlight the five best riders of the campaign.

For the second consecutive season, Alberta standout Lonnie West concluded the year ranked inside the Top 10 of the national standings. While he fell just short of his career-best No.4 rank, achieved in 2017, his No. 5 finish was one place higher than his year-end finish in 2020 when he was No. 6.

During his campaign, West not only logged two event wins, but also registered an accompanying nine Top-10 finishes. West first claimed victory in 2021 when he topped the field in Czar Lake in late July and earned his second golden finish of the season in late September when he emerged the winner in Prince Albert. As part of his win in Prince Albert in September, West registered the top two scores of his campaign, covering Western Wine for 88 points in Round 1, and Spooky Lukie for 89.5 points in the championship round. The now 26-year-old also logged an 88-point score en route to his Czar Lake win, earned when he covered Eski Time.

Mounting a strong second-half surge, West concluded the season with a string of four Top-15 event finishes, including a runner-up result on the Cup Series stop in Calgary, followed by an eighth-place result at the first-ever PBR Canada National Finals held in Edmonton, at the state-of-the-art Rogers Place. Finishing the year with a 51.85% riding average (14-for-27), West capped 2021 ranked No. 5 in Canada, 136.5 points removed from earning his first PBR Canada Championship.

While Jordan Hansen may not have made his 2021 PBR Canada debut until late September, he made a splash at the eight events he competed at. Hansen rode on home soil for the first time in late September at the Touring Pro Division event in Prince Albert. Immediately making his presence known, Hansen first covered Sure Shot for 85.5 points, before registering a monstrous 90-point ride aboard 2020 PBR Canada Bull of the Year Catch My Drift en route to a runner-up effort.

As Cup Series competition resumed in October, Hansen’s bid to earn a qualification to the PBR Canada National Finals continued as he finished second in Grande Prairie, eighth in Medicine Hat, and fourth in Calgary. As Canada’s premier bull riding tour travelled to Saskatoon, Saskatchewan for its final regular-season event of the year, Hansen finally struck gold. Going a perfect 3-for-3, including an 89.5-point ride on Finning Lil Shorty in the championship round, the Okotoks native won the PBR Saskatoon Classic.

After finishing second at the subsequent Touring Pro Division event in Yorkton, Hansen concluded the season 14th in Edmonton at the PBR Canada National Finals. Having gone a collective 15-for-20 (75%), Hansen finished 2021 ranked No. 4 in the national standings 93 points removed from the top rank.

In 2021, Zane Lambert nearly became just the second rider to be a three-time PBR Canada Champion.

Making a come-from-behind push at the PBR Canada National Finals inside Rogers Place, Lambert’s hopes of a third title came to a heart-breaking end when he was bucked off by Catch My Drift, the very bull he covered for 90 points twice earlier in the season, in a close 4.94 seconds.

“I thought I had it,” Lambert said days after the season ended. “I was staying in the hunt the whole time. It was a pretty cool season. It was a little bit short and sweet. I started it off in a good spot and was able to hold that spot through the season with some good draws.”

Lambert inevitably concluded the year ranked No. 3 in the standings, denied the 2021 PBR Canada Championship by a mere 56 points.

During the season, Lambert went a torrid 17-for-32 (53.13%) registering two elite Cup Series wins, along with an accompanying eight Top 10 finishes on Canadian soil across all levels of competition.

“This year we will give it another go,” Lambert said looking forward. “I want to finish it off on a good note, but I just want to go and enjoy it with all the people that we are lucky enough to have around us.”

No one had a more heart-breaking end to the 2021 season than Dakota Buttar. Dominant throughout the regular season, Buttar appeared poised to not only become the third multi-time PBR Canada Champion, but the first rider to win the title in back-to-back seasons.

However, in late October, in Saskatoon for the final regular season Cup Series event, Buttar sustained a groin injury that would inevitably prevent him from contending for the 2021 PBR Canada Championship on the final day of the season.

”It happened when it happened,” Buttar said resolutely. “I am kind of glad it didn’t happen three months earlier, because it would have cost me my whole year.”

After sustaining the injury inside SaskTel Centre, Buttar committed to a strict rehab plan, turning out of the Canadian Finals Rodeo in order to be in prime form the PBR Canada National Finals.

However, despite being diligent in his recovery, Buttar aggravated the injury during his 79.5-point ride on Look Alive in Round 1 of the year-end event. And while he attempted Devil’s Advocate in Round 2, bucked off in a quick 2.92 seconds, Buttar wasn’t able to compete on the final day of the season.

Relegated to the sidelines, Buttar was inevitably surpassed in the standings, finishing No. 2 by a slim 23.34 points.

“I am happy with how my year went,” Buttar said. “It was a bit slow starting. I was riding bulls, but not placing as deep as I needed to be. I had to work on some things, adjust some things in the middle of the year there and once I was clicking again, I had a really good September.”

In 2021, Cody Coverchuk joined an elite group of riders, becoming just the third rider to earn the PBR Canada Championship in multiple seasons. First earning the title in 2018, Coverchuk mounted an incredible come-from-behind surge on the last day of the 2021 PBR Canada National Finals to claim the year-end title and accompanying $50,000 bonus.

“I wanted to let the boys know I am not done, and that I will be here for a while yet,” Coverchuk said. “I am pretty happy with the outcome. Personally, I appreciate bull riding a lot more in 2021. When you get it all taken away from you, you learn to appreciate it.”

Entering the final day of the season, Coverchuk was No. 2 in the nation, 55.66 points behind then No. 1 Buttar.

While Coverchuk needed to rebound from a 0-for-2 showing on the first day of action for the 2021 PBR Canada National Finals, the state of the title race was drastically altered when No. 1 Buttar was relegated to the sidelines with a groin injury.

Shaking off his dismal performance from Friday evening inside the home of the NHL’s Edmonton Oilers, Coverchuk earned one of 12 coveted positions in the championship round after riding Rico for 83 points.

Awaiting Coverchuk in the final round was 2019 PBR Canada Finals Bull of the Year Finning Lil Shorty, a bovine athlete the Saskatchewan man needed to cover to keep his title hopes alive. Coverchuk, however, entered the matchup having had previous success aboard the Flying Four Bucking Bulls’ standout. He covered Finning Lil Shorty for 85 points during Round 2 of the 2016 PBR Canada National Finals.

Replicating his success, Coverchuk delivered under pressure, reaching the requisite 8 for an impressive 89.5 points to surge to No. 3 on the event leaderboard, clinching the 2021 PBR Canada Championship.

“In 2022 I am seeing big things for me. I want to go down south after our February events and get rolling to make the PBR World Finals next year. That has always been the goal, and I won’t be going anywhere till I achieve that.”