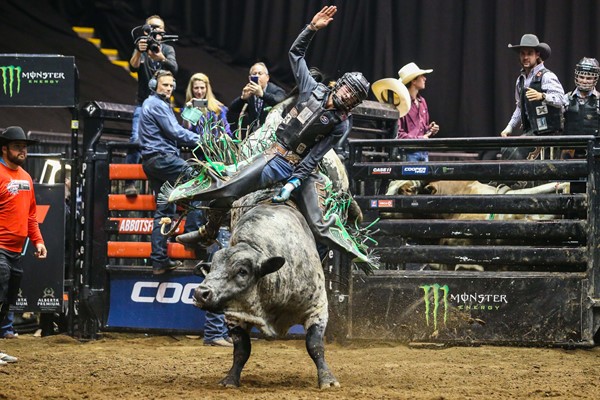 CALGARY – Less than three weeks remain before the first event of the 2018 PBR Canada Monster Energy Tour. Set to begin year three in Calgary, Alberta on March 24, we are looking back at the Top 10 moments from the 2017 season.

Coming in at the No.6 spot is Lonnie West and his incredible run during the Western portion of the 2017 Monster Energy Tour.

In the first five events West competed at in 2017, he went 7-for-13, logging three Top-5 finishes, ranked No.4 in the PBR Canada national standings after the PBR’s first International Major in Quebec City.

Early the next morning, however, after the Cadogan, Alberta bull rider flew to Grande Prairie, Alberta to compete at a rodeo on June 4, the trajectory of his season was greatly altered.

There, less than 24 hours later, he sustained muscle and ligament damage in his foot and was sidelined until the Elnora, Alberta Touring Pro Division event, the second Saturday in August.

Six weeks would pass before the second-year pro would heat up, notching his second runner-up finish of the year in Winnipeg, Manitoba at Bell MTS Place. There, he would earn $5,922.50, 50 world and 270 Canadian points.

In Round 1 the 21-year-old tied for second after making the 8 aboard Ulterra’s Counter Force for 84.5 points.

In the championship round, West logged his then high-marked ride of the season, covering Heaven’s Basement for 87.5 points to split the round win with event-winner Dakota Louis. Adding to the significance of the ride, the Vold Rodeo/Prescott bovine athlete was the very bull that broke his foot in June.

After beginning the night No. 14 in the Canadian nation standings, having fallen 10 spots during the summer run, West surged four positions to No.10, compliments of the finish.

He began the Saturday night event with a fifth-place effort in Round 1, riding Tippin’ Point for 84 points.

In the championship round, the 21-year-old delivered the high-marked ride of his PBR career, making the 8 aboard Anika’s Pet for 89 points.

His victory earned him $4,260.80, 465 Canadian points and 80 world points, catapulting him to the No.5 spot in the race for the national title as the tour headed to Saskatoon, Saskatchewan the next weekend, Oct. 20-21, for the PBR Canada Monster Energy Tour Finals.

In Saskatoon he finished seventh, leap-frogging Cody Coverchuk for the No.4 spot in the season’s final rankings.

But the then biggest win of his career, was yet to happen.

The night prior to the inaugural PBR Global Cup in Edmonton, Alberta, inside Rogers Place, West parlayed a 2-for-2 performance into his second PBR event win, collecting a career-high $24,686.67 and earning his Team Canada roster spot for the next two nights.

West opened the evening with a Round 1-winning 86.5-point trip aboard Pop The Latch, and closed the first-ever bull riding event inside the state-of-the-art arena with 83 points on Wait For It.

The heater however still wasn’t over for the middle West brother as the next week he would earn his first Velocity Tour event victory in New Town, North Dakota.

But, how would he celebrate? West was back to work as a mechanic the week after the Global Cup, travelling to New Town the following weekend to get a jump on the 2018 season.

Despite a haircut seemingly dashing his hopes so far this season, West looks to his debut on the elite tour and a spot at the PBR World Finals come November.

Stay tuned later week for the sixth entry in the countdown, No.5.