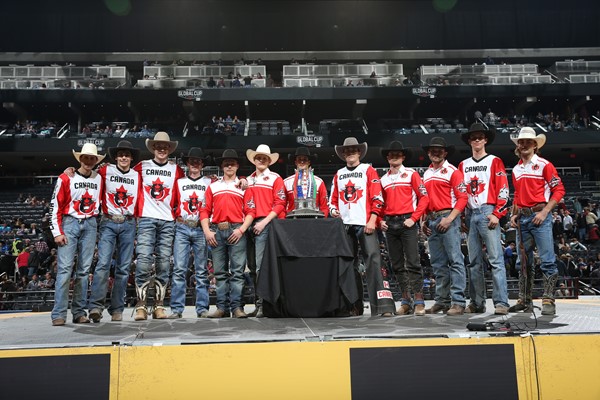 NEW YORK CITY – In 2017, PBR revolutionized western sports with the launch of the PBR Global Cup.

Establishing a new world order in bull riding, the event, bore witness to riders uniting together in national teams, competing for the very dirt they competed on, their share of record purses and the title of “toughest nation on dirt.”

Tapped to host the inaugural edition of the Global Cup, likened to the “Olympics of bull riding,” was none other than the state-of-the-art Rogers Place in Edmonton, Alberta.

Holding home field advantage, Team Canada was more determined than ever to retain their soil, sending the other four competing nations home without a piece of the glittering Global Cup trophy.

The first step to forming the team was naming a coach who would be responsible for not only selecting his contingent, but also in assigning what rider would attempt each of the nation’s draw.

Three-time PBR Canada Champion Aaron Roy was a quick pick for the prestigious, yet unique, duty.

“It’s quite a big honor, especially having fellow riders vote on it,” Roy said prior to the inaugural Global Cup.  “I think it’s going to be a great event, and for Canada to have the home field advantage, hopefully we can pull out the win at the very first one and be able to be the first country that has the bragging rights.”

Next came the assembling of the 14 riders who would wear the red and white jersey, competing for The Maple Leaf.

While five riders qualified prior to the three-day spectacle, nine additional spots remained vacant, filled via a combination of riders who advanced via their performance at the Canadian Qualifier held the day prior to the initial rounds of action for the Global Cup, and coaches picks held by Roy.

Despite the list of names featuring some of the nation’s top talent, eyes were affixed to Byrne and Robbins, thought to be potential headliners for the team.

For Byrne, his 2017 season was plagued with injury, battling through a broken collarbone and torn groin muscles which inevitably sidelined him from March through June, followed by another period of recovery spanning from August until October.

Initially forecasted to be out until the Global Cup, Byrne made an early return to competition for the Velocity Tour Finals, leaving many eager to see if his winning ways would reignite to propel Team Canada to victory.

Robins, however, had a much different story.

Roughly a month after being crowned the 2017 PBR Canada Rookie of the Year, his performance at the Canadian Qualifier drew the attention of many, including three-time PBR World Champion Adriano Moraes.

“That kid has heart,” Moraes said as Robbins attempted to reach the 8 aboard Pound The Alarm. “That kid is going to be really good.”

With the contingent of accomplished riders eager to deliver in front of the home nation crowd, Team Canada seized the moment, leading the Global Cup after the initial rounds of action.

The success, however, did not come without a price as Team Canada had two riders unable to compete on the final day due to injury.

Buttar was sent to the sidelines with three fractures in his left foot, while young gun Robbins did not return after sustaining a concussion.

The setback, however, did not deter Coach Roy.

When the dust settled the following day inside Rogers Place, despite a valiant effort, Team Canada was not able to retain their position atop the podium, concluding the inaugural Global Cup third.

The finish, however, still left the Canadian contingent proud, and eager for what was ahead of the 14 men that assembled the team.

“All of a sudden your whole team [and] every single Canadian is rooting for one another,” West said of the environment. “It’s not a competition about beating this team or beating that team, it’s just riding your bulls with your team behind you. This is the best atmosphere I’ve ever been to. I can’t even describe it. It was so fricking amazing.

“This Global Cup, I don’t know if we will ever top this feeling.”